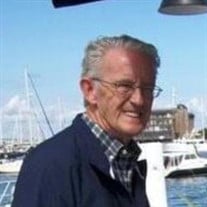 Thomas Ruane Malone Sr, 79, of Providence RI passed away Easter Sunday, April 4th 2021 surrounded by his loving family. “Papa” as he was affectionately called by many, grew up in Riverside RI and spent many years of his life in East Providence. He attended East Providence High School and was a graduate of the class of 1962. Tom received a degree in engineering from URI and spent decades working in the defense industry as a quality control engineer. Once retired, he worked at the local Benny’s on Branch Ave in Providence, a job he loved, He was known to many for his helpful tips, great smile and endless knowledge of the Red Sox and Patriots. A true lifelong fan of both. “Papa” was a great fan of music. He loved the Beach Boys, Chicago and Elton John. He was a great Bass guitarist and played in local Bands in the late sixties and early seventies, often playing gigs on Block Island. During the mid-seventies he would receive concert tickets and even the occasional backstage passes from his cousin who was a well-known concert promoter. Papa would share these gifts with his Son and nephews taking them on once in a lifetime meet and greets as well as fabulous concerts. He loved his family very much and spending time visiting with his daughter in Coventry, or his Son’s farm in New Hampshire were among his favorite things to do. He absolutely adored his grandchildren and much of his life was centered around trips to Galilee, walking around and enjoying downtown Providence, and generally just being with all his grandchildren in these places or wherever they may be. He is survived by his two children Thomas R Malone Jr of Johnston RI and his wife Jean Ann Malone, and His Daughter Beth Ann Malone of Coventry RI. He was the beloved grandfather of Thomas Ruane Malone III, Robert Joseph Malone, Lindsey Arlene Ramirez, Chelsea Leigh Malone, Steven Jeffrey Cacicia, Adam Tyler Cacicia, Brooke Isabella Arlene Cacicia, Kyle Robbins and great granddaughter Lorelai Winter Wallace. He is also survived by his sister Maryellen LaVerdiere of Pascoag, RI. He was the Son of the Late Thomas S. and Mary Malone of Riverside RI and is pre-deceased by Sister Kathy Poland of East Providence RI and Peter Malone of Pascoag RI A Memorial service and celebration of life are being planned for early May.

Thomas Ruane Malone Sr, 79, of Providence RI passed away Easter Sunday, April 4th 2021 surrounded by his loving family. &#8220;Papa&#8221; as he was affectionately called by many, grew up in Riverside RI and spent many years of his life in... View Obituary & Service Information

The family of Thomas Ruane Malone Sr. created this Life Tributes page to make it easy to share your memories.