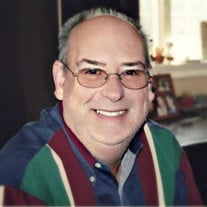 Robert Leo Pearson, 64, of Coventry, passed away Monday morning at Miriam Hospital with his family at his side.He was born to the late James and Hazell Pearson on August 2, 1949 in Newport, RI. He was more of a son than a son in law to Walter and Harriet Gilbert.He was happily married to Susan J. Gilbert Pearson.He is survived by his wife Susan; his daughters Kayla and Chelsea; his sons Christopher and Robert; his brothers James and Allen; and his aunts Jane Fuller and Elfrieda Pierce.Bob loved to learn and earned a Bachelors of Ancient History from Roger Williams University; a Masters of Business Administration from Bryant University; a Bachelors of Special Education and a Masters of Elementary Education from Rhode Island College.Bob retired from Lincoln High School due to illness in 2010 where he loved helping his students reach their full potential. Prior to that he worked for Fleet National Bank and Household Finance Company. Other than teaching, his favorite job was lifeguarding and managing the Navy Beach Club. He was a former Scout Master of Troop 8 in Barrington, RI. He was a coach of youth baseball, soccer and basketball.Bob was a spiritual Christian and attended St. Marys Episcopal Church, Seekonk Congregational Church, Barrington Baptist Church, and Haven United Methodist Church during various stages of his life. He enjoyed being a Sunday School Teacher, Trustee and putting on church breakfasts and suppers.Bob was an avid New York Yankees fan and New England Patriots fan. He loved riding on his John Deere tractor, attending his children's sporting, music, and school activities. He enjoyed cooking for family, friends, and strangers alike. He loved playing cribbage, dancing, boating, storytelling, joke telling, and surprising people. Being very involved with his children's lives gave him the most happiness, and he was never afraid to show his love and emotion to those he cared about.He was the only member of his immediate family that ever saw a moose in Maine, and he was very proud of that.He was an incredibly devoted husband. He would often bring Susan flowers, cards, surprises, and showered her with love. He was a textbook romantic, and would go to the ends of the Earth to show her how much she meant to him. Without fail, he could always find a way to make her laugh. Her birthday would never pass without him hiding a hilarious birthday card to complement the romantic card to express his love.His laughter and love with remain forever in our minds and hearts.A memorial service will be held at 12 p.m. Saturday, December 14th at Haven Methodist Church, 200 Taunton Ave, East Providence, RI 02914.In lieu of flowers, the family is requesting donations be made out to the Hope Alzheimers Center at 25 Brayton Ave, Cranston, RI 02920

Robert Leo Pearson, 64, of Coventry, passed away Monday morning at Miriam Hospital with his family at his side.He was born to the late James and Hazell Pearson on August 2, 1949 in Newport, RI. He was more of a son than a son in law to Walter... View Obituary & Service Information

The family of Robert Leo Pearson created this Life Tributes page to make it easy to share your memories.