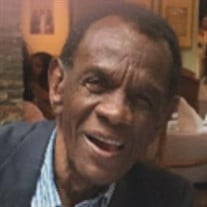 Reginald Jones, Sr died October 16, 2018. He was born on March 6, 1936, in Providence, RI to Earnest and Margaret Jones. He received an undergraduate degree from Roger Williams University and earned his advanced degree in counseling from Beacon College of Massachusetts. Reggie worked feverishly as a dedicated community organizer during the 1960’s civil rights movement and was one of the co-founders of Opportunities Industrial Organization (OIC) in Providence, RI. He opened his private counseling practice, Jones and Clarke Associates, in 1983 and prided himself on being “A man of the people, for the people.” His work in both the civil rights movement and the counseling profession afforded him with countless opportunities to help individuals and families overcome issues concerning addictions, marriage and family, and personal growth for more than 40 years. His readiness to push others to grow spiritually and emotionally beyond themselves and face life’s challenges head-on, led to mentoring countless individuals, launching them into the field of helping others. Reggie’s warm hugs, hearty laugh, contagious smile, sense of humor, signature deep voice with an eagerness to sing at the drop of a hat, are some of his special gifts that drew us all to him and will stay with us forever. He believed that life was about “Making a Quantum Leap” and “living life one day at a time”. He was a longtime friend of Bill W. where he maintained 46 years of continuous sobriety. He was known throughout the recovery community for his wisdom and humility and helped numerous individuals to also achieve sobriety. Reggie loved 60’s music and had smooth moves when dancing the jitterbug or zydeco with his favorite dance partner. He loved traveling bringing his infectious smile, philosophy of life and laughter throughout his travels both here and abroad. He mostly enjoyed just having in-depth discussions with friends and family. Reggie will not be forgotten and will be truly missed by everyone for generations. Reggie was proceeded in death by his father Ernest and mother Margaret Jones. He is survived by his wife Judith Clarke-Jones of Wakefield, RI. a sister Revetta Jones, four children Deborah Crystal of Georgia, Reginald II and his wife Jewell Jones of Connecticut, Steven Jones of Georgia, Sean Richardson of New York, 16 grandchildren, 14 great-grandchildren and 1 great-great-grandchild. His family wishes to thank South County Home Health, Hope Hospice, and the physicians and staff of South County Hospital. A celebration of Reggie’s life will be held Saturday November 10th at Quidnessett Country Club 950 N. Quidnessett Rd. North Kingstown, RI from 10:00 am-2:00 pm. If you wish, in honor of Reggie, donations can be made to Welcome House of Peaceable, RI or the Galilee Mission in Narraganset, RI.

Reginald Jones, Sr died October 16, 2018. He was born on March 6, 1936, in Providence, RI to Earnest and Margaret Jones. He received an undergraduate degree from Roger Williams University and earned his advanced degree in counseling from Beacon... View Obituary & Service Information

The family of Reginald Jones Sr. created this Life Tributes page to make it easy to share your memories.