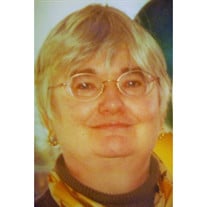 Paula Frances Monahan, 60, of Wakefield, died Sunday evening at her sisters home after a courageous 5 year battle with metastatic breast cancer. She was born October 6, 1953 in Pawtucket RI, the daughter of the late Raymond F. Monahan andthe late Norma (Pickavant) Monahan. She was pre-deceased by her brother Raymond D. Monahan. She grew up in the Pawtucketarea and moved to Wakefield as a teenager. Before her illness she had work previously for Atlantec, American Powerconversion, and Leviton Manufacturing as an Electronics pieceworker. Even with her illness Paula devotedly took care ofher father for many years until his passing in November 2012. Paula was baptized as one of Jehovah's Witnesses as a youngwoman. As an active member of the Wakefield Congregation, Paula enjoyed attending and participating in meetings twice each week at the Kingdom Hall and sharing her Bible-based faith with others through the door-to-door ministry. She also enjoyed reading the Bible and Bible-based publications and learning about creation. All of that helped her develop a solidrelationship with Jehovah God.Known for her eclectic style, Paula enjoyed a vibrant life filled with love, and she was loved by all and will be foreveran indelible part of everyone who knew her. Having enjoyed living her adult life at the ocean, Paula's life was much likethat; beautiful; soothing, and always in our hearts and mind. With an amazing sense of humor, Paula was a joy to bearound. Paula would light up every room she entered with her bubbly personality, colorful hats and her sunflowers whichwere always somewhere present. An avid reader Paula's intellectual wit rivaled scholars as she often engaged others in herlove of mysteries. history, especially Egyptian culture, and of course her love of westerns and everything John Wayne. Paula was deeply religious and held her fellow friends especially closest to her heart. Thank you Jenn Manning, for bringing so many friends to see Paula in this tough last year and being with her daily right up to the end. Paula showered her niece and nephews with attention through their childhoods. She found creative ways to entertain them,leading to many fond family memories. She also enjoyed traveling and took many trips. She and her close friends, Vickyand Saundra Robinson visited places such the Carribean and her favorite spot, Walt Disney World. One of her Most Memorabletrips was To England with her Father and Mother before Moms passing in 1999. Over the years Paula compiled an impressive collection of Sunflowers and porcelain cats and cat related items. We must not forget her Doll collection which wasimpressive. She was the devoted Cat lover and companion to her most beloved cat Kia, who was with her at her passing. Her loyalty and faithfulness to her Creator, right down to the end of her life, epitomized the true Christian faith,setting an example worthy of imitation. Paula will be missed greatly by her family and fellow believers, all of whomeagerly look forward to seeing her again after she is resurrected on Paradise Earth.In addition to her Sister Frances E. Ferris and her Brother in law, Gary A. Lefebvre with whom she resided in NorthSmithfield, Paula is survived by her Niece Holly Ferris of Pawcatuck Ct; her Nephews and wives; Christopher and Lindsay Ferris of Riverside, Ryan and Marisa Ferris of Riverside, and Kyle Ferris and fiancé Kate Lynch of Wakefield. She is alsosurvived by many sisters and brothers in her Christian faith*A committal of Ashes will take place Friday, May 9th 2014 at 10 am, at Swan Point Cemetery, 85 Blackstone Blvd,Providence, RI 02906. In lieu of flowers, gifts may be made to Home and Hospice Care of Rhode Island, 1085 North Main Street,Providence RI 02904. A memorial service will take place at 2 p.m. Saturday May 17 at the Kingdom Hall of Jehovah's Witnesses, 1087 Tuckertown Rd. Wakefield, Rhode Island 02879. Please send memorial condolences to the family at [email protected]

The family of Paula F. Monahan created this Life Tributes page to make it easy to share your memories.