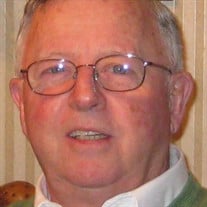 Patrick J. Keeley, 80, of Middletown, RI passed away at home March 5, 2022. Born in Newport, RI on November 26, 1941, he was a son of the late Joseph T. and Ellen N. (O’Connor) Keeley. He is survived by his wife of 59 years, Marianne (Ochs) Keeley, his daughter Sharon M. Keeley Vidinha of Middletown, RI, his grandson Joshua A. Keeley (Anne Kratz), great-grandson Thomas O Keeley of Bradford, NH and his brother Michael J. Keeley (Jeanine) of Edenton, NC. He is also survived by many nieces and nephews both in this country and Germany. In addition to his parents, he was predeceased by his son-in-law, the late Scott E. Vidinha. Patrick attended St. Clare Kindergarten, Hazard Memorial (St. Joseph’s School) and De La Salle Academy. Upon graduation, Patrick enlisted in the United States Air Force and attended Air Police School. He was then assigned to Okino Air Station, an isolated remote base in the South China Sea. Due to the nature of this assignment, the length of the tour was one year only. Patrick opted for a consecutive overseas assignment and was sent to Headquarters USAFE in Wiesbaden, Germany. He spent four years in the 7100th Air Police Squadron as an Air Police investigator. During this time, Patrick met and married Marianne and their daughter Sharon was born in Wiesbaden. Upon discharge from the Air Force Patrick and family returned to Newport and in 1965, Patrick joined the Newport Police Department as a patrolman. A year later Patrick switched careers and joined the United States Post Office. During his 20 year career as a letter carrier, Patrick attended night classes at the University of Rhode Island and graduated Cum Laude with a BA in English and History. While at URI, he was inducted into Phi Alpha Theta and The International History Honor Society as a life member. After 20 years as a carrier, Patrick applied and was accepted for a management position in the postal service. He rose rapidly through positions of ever increasing responsibility until he became the Superintendent of Postal Operations. In 1993, Patrick was selected to become the postmaster of North Kingstown, RI, the position he held until his retirement in 1997 ending a 31 year career with the postal service. Concurrent with his job at the Newport Post Office, Patrick joined the 26th Infantry Devision Artillery of the Mass. Army/National Guard, where he was the Division safety NCO. He next began a second career at the Naval Station Newport, working for the Morale, Welfare, and Recreation Department. He spent an additional seventeen years working with MWR in many different capacities. His favorite assignment was at the Naval Station Marina. He retired from the base in 2014 and was able to devote many years fishing, boating and enjoying retirement. Many a Thursday afternoon, he could be found at Cappy’s discussing world events and sharing a joke or two. Patrick was active in the community and was a member or volunteer of many local organizations. He was a Past Grand Knight and a life member of Council 256, Knights of Columbus. He was also a life member of Division One Ancient Order of Hibernians. He served as Vice-Chairman of the Newport Waterfront Commission. He volunteered as a tutor with Volunteers in Newport Education. He served as a lector at St. Mary’s Roman Catholic Church. He was a former member of Lodge #8 Fraternal Order of Police Associates. He was a volunteer powerboat instructor at Naval Station Newport for 17 years and lead instructor for 5 years. He was a member of NAPUS (National Association of Postmasters of the United States)and was also a member of the National Association of Letter Carriers during his career as a letter carrier. Patrick will be greatly missed by his family and many friends. A Mass of Christian Burial will be held Friday, April 8, 2022 at 9:00 a.m. in St. Mary Church, 12 William Street, Newport. A celebration of his life will follow at 11:00 a.m. at the Hibernian Hall, 2 Wellington Avenue, Newport, RI.

The family of Patrick J. Keeley created this Life Tributes page to make it easy to share your memories.