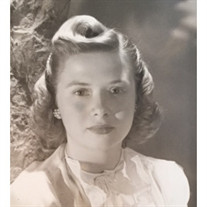 BENNETT, MARY KENYON (ARMSTRONG) passed away peacefully on September 7th, 2016 in Bristol RI at the age of 92. She had been a resident of Silver Creek Manor for the past 2 years. Prior to that she had lived in Barrington, East Greenwich and Old Buttonwoods Beach.Mary is survived by three children: M. Kenyon Densley (J. Michael Rogers) of Barrington RI, LeRoy A. Bennett of Santa Monica, California and Beijing China, and Melissa Bennett Narcizo (David) of Newport, RI. Four grandsons: Tucker Densley, Morgan Densley, Dakota Bennett, Isaac Narcizo & three great-grandchildren Gabriel, Stella and Moses Densley.Mary was born on June 3,1924 in Pawtucket RI to LeRoy Kenyon Armstrong an accomplished organist and Kathryn Flint. She graduated from Hope High School and Kathryn Gibbs Secretarial School after which she worked for Brown University President Henry Ristin and Vice President James Adams. She later graduated from the University of Rhode Island earning a degree in psychology and a masters degree in education. She taught fourth grade from 1965-84 and music from 1984-89 until she retired from Rocky Hill School. Motherhood was always her first priority however she was also natural born teacher and gifted musician. She performed on the Providence Journal Bulletin radio show Musical Horizons & at music clubs, weddings, theater productions, and for Congressman Joseph Martin, President (then Vice President) Nixon and President (then Senator) John F. Kennedy . She continued to sing throughout her struggle with Alzheimer's disease and was known by all at Silver Creek by her voice and wonderful sense of humor, as evidenced by the words and music of Bless the Beasts and the Children tattooed on her right ankle to celebrate her 75th birthday. She loved to travel. She visited family in Singapore, London and Hong Kong, studied in England and Scotland, and attended the celebration of Moscow's 850th Anniversary with her son. These were among her favorite adventures. She enjoyed concerts of all kinds and meeting musicians ranging from The Mormon Tabernacle Choir to Prince. A special word of thanks to all at Silver Creek Manor and Beacon Hospice who went above and beyond to love, care for and appreciate our mother especially during her final hours.Relatives and friends are invited to a memorial service at 11:00 AM, Saturday, September 10th, at the Buttonwoods Beach Chapel located at 1003 Buttonwoods Ave (between 9th and 10th Avenues), Warwick RI. A reception to follow. Burial will be private. In lieu of flowers, donations may be made to the Alzheimers Association in her honor.

BENNETT, MARY KENYON (ARMSTRONG) passed away peacefully on September 7th, 2016 in Bristol RI at the age of 92. She had been a resident of Silver Creek Manor for the past 2 years. Prior to that she had lived in Barrington, East Greenwich and... View Obituary & Service Information

The family of Mary Kenyon Bennett created this Life Tributes page to make it easy to share your memories.