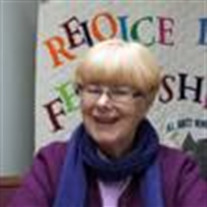 Judy died peacefully at home on December 2, 2018. Married to Raymond E. Mitchell for 55 years, she was mother to Jeremy (Patricia) Mitchell, Jonathan (Helen) Mitchell; Naomi (Paul)Cummings, Fiona McDevitt(Dustin Freeley), and Matthew (Maria) Brown. Judy had three grandchildren, Julia, Brian and Kevin. Her parents were Raymond and Mary(Salisbury) Naughton. She is survived by her sisters Sharon(David) Homan, Nora Naughton, and Dana Naughton (Stephen Rubin), and her brothers Raymond and Michael Naughton. Her sister Mary and brother Brian are deceased. Judy had two professional careers. First, beginning in 1972, she joined the faculty of Rhode Island College where she had received her BA, majoring in English and History and in 1967 her MAT from Brown University. [Judy had begun as a part-time instructor in the English Department in 1962] In 1982, Judy was tenured after receiving her PhD from the University of Connecticut. Her dissertation was entitled “Changes in Adolescent Literature with Homosexual Motifs , Themes or Characters”. Judy eventually attained full Professorship and retired as Professor Emerita. Judy loved teaching, and continued as an Adjunct for a number of years after retirement. During her years at RIC, Judy taught a range of courses, wrote for a wide range of publications and professional journals, presented papers at numerous conferences, and provided workshops for teacher and other educators in Rhode Island and throughout New England. Judy received the Paul Maixner Distinguished Teaching Award for Arts and Sciences for 1987-88.From 1990-1999 she held a joint appointment in Secondary Education where she could influence the training of student teachers. In the spring of 1995 and fall of 1996, Judy participated in a project at John Hopkins University where she presented papers and participated in discussions on “Spiritual and Therapeutic Uses of Children’s Literature.” Judy was also a long time member of Dodeka, an organization of clerical, academic and other professionals who met regularly at Brown University to hear and present papers on a variety of topics. Judy was a frequent presenter. Throughout her life, Judy had a strong spiritual component to her life and the call to ministry lead to her ordination to the Episcopal priesthood in December, 1992 while still teaching at RIC. In 1993, she was called to be Rector of The Church of the Advent, a small church in Pawtucket. Eventually, the call to ministry overtook the passion for teaching, and Judy retired from RIC and soon after, accepted the call to be Rector of St. Matthew Church in Barrington, where she served for ten years. One of Judy’s lasting gifts (with much support and hard work on the part of the two congregations) to St. Matthews was the joyous merger of St. Matthew and St. Mark Churches to form Sts. Matthew and Mark of Barrington. Part of the merger agreement was that Judy would assist the new full-time rector for a few months and then leave. After leaving Barrington, Judy accepted the call to be Priest in Charge of Saint John the Divine in Saunderstown. At the time, she thought that St. John’s would probably be her last long-term assignment. However, in 2014, Judy was diagnosed with a rare form of cancer, myelofibrosis, a disease for which there is neither treatment nor cure. So, when her five year assignment ended Judy, at the recommendation of Bishop Knisely, retired. However, several months into retirement, Judy joyfully accepted a quarter-time assistantship at St. James Church in North Providence. This eventually lead to Judy becoming Vicar of St. James and once again joyfully and gratefully, as she articulated it, “ministering to the people of God”. In late winter of 2017 Judy was asked by the Bishop to become Priest in Charge at All Saints Memorial Church in Providence, which she did in February of 2018. The understanding was that in June, Rev. Julie Hannovan would be Priest in Charge and Judy could be her assistant. All went well at All Saints, with a happy congregation and a happy clergy. Then, Judy’s health once again crashed, and this time, unlike the many times before, Judy could not overcome the new disease. So, after a grand finale Thanksgiving week in which she rejoiced surrounded by love and joy with all of her extended family, Judy slipped into a coma on Nov. 25 and died peacefully in her bed on Sunday, December 2, 2018. A memorial service to celebrate Judy’s life will be held on Saturday, December 15, at 10:00 a.m. at All Saints Memorial Church in Providence. All are welcome. If you wish to do so, donations, in lieu of flowers, could be made to the Shinn Study Abroad Fund at Rhode Island College; or to the Episcopal Conference Center Scholarship fund; or to the Pawtucket Library.

The family of Rev. Judith N. Mitchell, PhD. created this Life Tributes page to make it easy to share your memories.