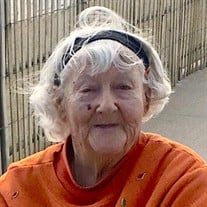 Joan Ann Boisvert of Wakefield, RI passed away on December 10, 2020, at the age of 86. She was the daughter of Joseph R. Jr. and Dorothy E. (Jones) McKanna. She is survived by her son John Blasik and his wife, Anne, of San Jose, CA; her son Mike Blasik and his wife, Nancy Morrison, of Arlington, MA; her three grandchildren, Mason, Sabrina, and Sasha Blasik; and her step-children, Sherry Humes Dane of South Kingstown, Robert Rose of St. Augustine, FL, Jephry Boisvert of North Kingstown, Greg Boisvert of Pasadena, CA, and their spouses, children and grandchildren. She was the wife of the late Edgar V. Boisvert, the former wife of the late Roman K. Blasik, the sister of the late Dennis McKanna, and the stepmother of the late Susan Ward. Joan was born in Providence on May 4, 1934, and grew up in West Warwick, where she attended St. Mary’s Catholic Church and graduated from West Warwick High School in the Class of 1952. She was a longtime employee of Metropolitan Life Insurance Company in West Warwick, where she aided the company’s advance into the computer age. In the 1970s, she was instrumental in the creation of the West Warwick Senior Citizens Center, an achievement of which she was deeply proud, before retiring to South County with Edgar in the 1980s. In retirement, she volunteered at Animal Rescue RI, South County Community Action food bank, and at All Saints’ Church in Belmont, MA, where she regularly attended services and helped to prepare meals for the Bristol Lodge homeless shelter. Joan was an avid reader who loved to spend time at the beach, swimming and enjoying the sun. After the death of Edgar in 2001, Joan lived independently in her apartment at Indian Run Village in Wakefield, where she enjoyed cooking and baking for her friends, neighbors and fellow dialysis patients. Joan was fiercely resilient and resolute; she had triweekly dialysis treatments the last fourteen years of her life, outliving her life expectancy of five years on dialysis by nearly a decade. She made regular trips to Massachusetts to be with her family, where she would watch classic movies with her son and take pride in watching her grandchildren grow. Joan will be remembered as a beloved mother, grandmother, and friend. She will be greatly missed by her family, and also by her many friends, especially Paul and Tina Streeter. Joan’s cremains will be interred at Rhode Island Veterans Memorial Cemetery in Exeter, alongside those of her beloved Edgar, in a private ceremony. Due to the Covid-19 pandemic, a celebration of her life will be held at a later date. Her family requests that in lieu of flowers, a Tribute Gift to remember Joan be made to the Annual Fund at South County Hospital, 100 Kenyon Avenue, Wakefield, RI 02879 (online at https://www.southcountyhealth.org/ways-to-give/annual-fund).

Joan Ann Boisvert of Wakefield, RI passed away on December 10, 2020, at the age of 86. She was the daughter of Joseph R. Jr. and Dorothy E. (Jones) McKanna. She is survived by her son John Blasik and his wife, Anne, of San Jose, CA; her son... View Obituary & Service Information

The family of Joan Ann Boisvert created this Life Tributes page to make it easy to share your memories.

Joan Ann Boisvert of Wakefield, RI passed away on December 10,...