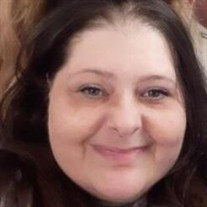 We are very sorry to announce the untimely passing of Jennifer Rose Rush. Jenny was born in Steubenville, Ohio in October 1974 but spent most of her life in Wake County, North Carolina. She graduated Athens Drive High School in Raleigh in 1993 and later attended Peace College. She was forever interested in science and biology, in no small part due to a series of medical ailments that limited, but never defined, her life. Born with OSI (brittle bone disease), Jenny struggled to have the active lifestyle enjoyed by so many others, and the consequences of her trying included a lot of broken bones and pain. Despite this, she always managed to smile and always tried to maintain a positive outlook for others. Jenny was brilliant and sharp-witted, those who grew up with her agreed she not only WOULD argue with a stop sign, she might be the only person who could win. She was emotionally attentive and very observant. Not very much got past her. She was also possessed of such sensitivity, kindness and desire to help others without thought of reward that she was a limitless example of all the best qualities so many of us struggle to find in ourselves. Jenny was known for crafting, for videogaming, for collecting family photos and working tirelessly to document genealogy and keep living family members connected, and for volunteering to do stage makeup for countless high school drama productions. She’s the only one of her generation who knew everyone and where they fit in the big family picture. She also did Halloween makeup for almost a whole neighborhood of kids more than once and made so many kids happy with her efforts. Jenny never had kids of her own, but in her way at some point she had almost everyone else’s kids: she was a devoted babysitter, aunt, stand-in mom and parental figure to generations of beautiful and happy people, and they all know and remember her fondly many of them have expressed that some of the traits they like about themselves or want to have, they got from her. Jenny was strong and beautiful and special and the sun does not seem to shine as brightly without her here. Jenny is preceded in death by both her parents: Robert Rush Jr of Steubenville, Ohio and Marcia Rush of Raleigh NC. She is survived by her younger sister Renee, also of Raleigh, her younger brother Robert of Killeen TX, her partner Josh of Warwick RI, and the countless family members and friends she dearly loved. We will all miss her very much.

We are very sorry to announce the untimely passing of Jennifer Rose Rush. Jenny was born in Steubenville, Ohio in October 1974 but spent most of her life in Wake County, North Carolina. She graduated Athens Drive High School in Raleigh in 1993... View Obituary & Service Information

The family of Jennifer Rose Rush created this Life Tributes page to make it easy to share your memories.

We are very sorry to announce the untimely passing of Jennifer...