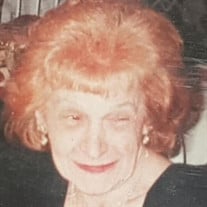 Jennie M. (D’Antonino) Lupino, 94, passed away March 13, 2021. Born in Providence, she was a daughter of the late Giuseppe and Maragret (Buglio) D’Antonino, wife of the late Joseph R. Lupino, mother of Steven Lupino and his girlfriend Lynda Andrews of Warwick, RI, Joseph Lupino and his spouse Taylor Lupino of Attleboro, MA and the late David Lupino, grandmother of Lisa M. (Lupino) Bacon and spouse Stephen F. Bacon of Coventry RI and Joseph M. Lupino and Spouse Kim Lupino of Coventry, RI, great-grandmother of Isabella J. Walker, Jordan J. Bacon, Dylan David Bacon, Michael Lupino and Madison Lupino of Coventry, RI, sister of the late Harry D’Antonino of Providence, RI. Jennie grew up in the heart of Federal Hill in Providence RI. She graduated from Classical high school in 1944. Jennie began working at the Walsh-Kaiser Shipyard in Cranston RI. She was a devoted and loving daughter, wife, mother to her 3 sons, grandmother and great-grandmother. Jennie and her late husband Joseph Lupino started a business in Warwick in the early 1950s known as J&J Jewelry in Warwick RI. After a few years they decided that type of business wasn't for them and because Jennie loved pizza so much, her late husband Joseph decided that they should open a pizza business. They became the proud owners of a big staple in the Warwick community, Lupino's Pizza for over 55 years. She was also an avid parishioner of St. Kevin's Church for many years. Jennie loved her community and all of their customers as much as she loved her family. She was a strong devoted hard working woman in the pilar of the community. A Mass of Christian Burial will be held Tuesday at 10:00 a.m. in St. Kevin Church, 333 Sandy Lane, Warwick, followed by Burial in the Rhode Island Veterans Memorial Cemetery, Exeter. In lieu of flowers, donations may be made to Pet Refuge, NKEAPL, 500 Stony Lane, North Kingstown, RI 02852-0083 A live stream of the Mass will be available on saintkevinri.org “Click to view a livestream Mass at St. Kevin Church”.

Jennie M. (D&#8217;Antonino) Lupino, 94, passed away March 13, 2021. Born in Providence, she was a daughter of the late Giuseppe and Maragret (Buglio) D&#8217;Antonino, wife of the late Joseph R. Lupino, mother of Steven Lupino and his girlfriend... View Obituary & Service Information

The family of Jennie M. Lupino created this Life Tributes page to make it easy to share your memories.