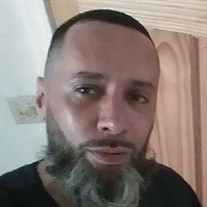 Jason Harris, 49, of Pawtucket, RI passed away peacefully at the HopeHealth Hulitar Hospice Center on February 2, 2022 following a difficult bout with cancer. Born in Providence, Rhode Island, he was the son of Stephen Viveiros and the late Lola Harris. Growing up in the East Providence area, Jason formed life-long friendships which meant the world to him. After spending time in North Carolina with extended family, Jason returned to Rhode Island, calling Pawtucket home. Jason worked for over 15 years at House of Pizza on Division Street, making many new friends along the way. Jason enjoyed breakdancing as Crazed123, laughing until he couldn’t breathe, beatboxing and the occasional scary movie if his cousin was protecting him. Jason helped others gain confidence, inspire them, and do whatever he could to help people achieve their goals. He was the go-to guy for honest advice. Jason is survived by his sons Jaymiel Harris of Pawtucket and Samuel Harris of Providence, daughter-in-law Jeimy Harris of Providence, his grandson Jason Harris of Providence, his sisters Amie Paredes (Harris) of Riverside, Cheyanne Viveiros of East Providence, his father, Stephen Viveiros, his grandfather Samuel Harris of Riverside, and countless aunts, cousins, nieces and nephews who he adored. He was predeceased by his grandmother Claire Harris, son Jason LaFleche, his brother Robert Ponte, and Robert Vazquez, who he considered a son. A celebration of Jason’s life will be held on Sunday, February 13 from 12:00 PM - 3:00 PM at the Gridiron Sports Bar, 2416 Grand Army of the Republic Highway in Swansea, MA. Please call or text Melissa at 401-338-4430 with a headcount so we can prepare our luncheon menu. In lieu of flowers, friends and family are encouraged to donate to a GoFundMe to assist with the cost of Jason’s cremation expenses: https://gofund.me/cf5eabf0

Jason Harris, 49, of Pawtucket, RI passed away peacefully at the HopeHealth Hulitar Hospice Center on February 2, 2022 following a difficult bout with cancer. Born in Providence, Rhode Island, he was the son of Stephen Viveiros and the late... View Obituary & Service Information

The family of Jason Harris created this Life Tributes page to make it easy to share your memories.

Jason Harris, 49, of Pawtucket, RI passed away peacefully at...