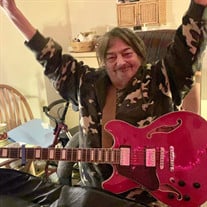 Gerard Roger Guyer, Sr., 69, of Riverside, passed away March 13, 2022. Born in Central Falls, he was a son of the late Henry and Beatrice Guyer. Survived by 3 children Lori-Ann Guyer of East Providence, Lynda Marie Guyer-Flood of Central Falls, Gerard R. Guyer, Jr. of Woonsocket, 2 grandchildren Jordan Andrade of Lincoln and Matthew Tardiff of Central Falls and 3 great grandchildren. He was the brother of Annette Guyer of Central Falls and also leaves many nieces and nephews who he cherished as well as great nieces and nephews, along with many friends, neighbors, and his favorite four legged fur-pals Bella and Cody. He was the grandfather of the late Hillary Lynn Guyer and the uncle of the late David H. Guyer. He was the brother of the late Robert Guyer, Teresa Cotnoir, Denise Lapan and Lucien Guyer, Sr. His Native American ancestry was something that he really became more and more proud of as he started to trace his roots and heritage to Cree Nation History. He studied it and honored it proudly for the last 12 years. He was a huge fan of the Cleveland Browns and was the biggest fan of WWE. He enjoyed building model cars and model ships. He was a knowledgeable coin/currency collector and he knew facts, dates, what the marks meant and his collection he had been doing for 25 more years is vast and he was always eager to share his excitement, along with his knowledgeable history of every note and coin. Gerry knew their values, the significance of each mint mark, dates and many interesting facts attached to each piece which he proudly collected for over 25 years. lifelong passion for playing acoustic guitar was hand in hand with his love of all music which he shared with so many. and recently started tinkering on keyboards. His guitars were his passion. He enjoyed listening to The Beatles, Roy Orbison and Harry Chapin with his late sister Denise. In his younger years, he enjoyed fishing, bow hunting, horseshoes and camping. He loved the sky, nature, earth, moon, the snow and dream catchers. Services will be private. In lieu of flowers, donations in his memory may be made to HopeHealth Hulitar Hospice Center, 1085 North Main St., Providence, RI 02904.

The family of Gerard Roger Guyer, Sr. created this Life Tributes page to make it easy to share your memories.