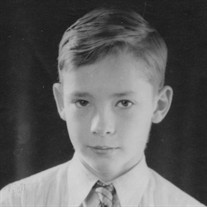 Edward Auguste Biastre died peacefully in his sleep on January 11, 2021 at 86 years of age. He is survived by his son, Stephen Biastre, daughter-in-law, Karen, and grandson, Nathan Biastre, of Middletown, RI, and his sister, Rose Larocque, of Wakefield, RI. Edward was born on August 31, 1934 in South Kingstown, RI to Jacques A. Biastre and Agnes (Gardner) Biastre. He is predeceased by his sister, Virginia Henderson. Edward grew up in the Fifth Ward in Newport, RI and attended De La Salle Academy followed by graduation from Rogers High School in 1952. Edward also attended the Rhode Island School of Design. He served as a Radioman in the US Naval Reserves serving during the Korean and Vietnam era. He enlisted in 1951 and was honorably discharged in 1964. Edward worked for the Auchincloss Family as a gardener and landscaper at Hammersmith Farm in the 1950’s, as well as into the early 1960’s during the Kennedy Administration. He always laughed when recalling the stories of having to clean up the cow patties from the large pasture at Hammersmith, so President Kennedy would not step in one as he exited Marine One and made his way on foot to the main house. Ed also spent some years at Electric Boat as a sheet metal worker, and as a Security Guard for various companies out west. He was awarded during his time as a Security Guard for putting out a fire in a movie theatre and saving the building and its occupants. Edward enjoyed drawing, coin collecting, hot sauce, and reading. Edward also loved music; his favorites included Glen Campbell, Nat King Cole, and The Mills Brothers. The family would like to thank Jennifer Nugent of Youngsville, LA and Heatherwood Rehabilitation and Health Care Center in Newport, RI for the care and attention they gave him in his later years. In lieu of flowers, donations may be made in Edward's memory to: Acadiana Regional Coalition on Homelessness & Housing (ARCH) at the following web site: https://www.archacadiana.org Services are private.

Edward Auguste Biastre died peacefully in his sleep on January 11, 2021 at 86 years of age. He is survived by his son, Stephen Biastre, daughter-in-law, Karen, and grandson, Nathan Biastre, of Middletown, RI, and his sister, Rose Larocque,... View Obituary & Service Information

The family of Edward Auguste Biastre created this Life Tributes page to make it easy to share your memories.

Edward Auguste Biastre died peacefully in his sleep on January...