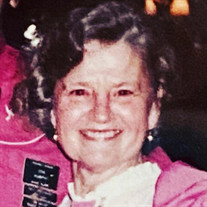 Dorothy L. Murphy 90, a lifelong R.I. resident died peacefully on February 1, 2021. She worked in various specialties of nursing throughout her life as an RN and spent the last years of her career as a psychiatric nurse in Cranston until retirement. Dorothy met the man of her dreams, Donald R. Murphy, at a party while they were students at Classical High School. She was a cheerleader while Donald played on many sports teams. Dorothy went on to complete nursing school and continued to date Donald while he attended Bowdoin College. After their schooling, they were happily married for 63 years until his death in 2015. She and Don especially loved spending time with their six children, all raised in Edgewood: daughter Linda and Len Brisco of Pacific Palisades CA; son Donald Murphy Jr. and Laurie of Coventry, daughter Susan and David Hassard of Ashaway, Stephen Murphy(deceased), Kenneth Murphy of North Smithfield and son Gregory and Jodi Murphy of North Kingstown. They will all think of her often, remembering she was always a very loving and unselfish mom and feel especially blessed to have and hold so many heartwarming memories of her. Dorothy was also survived by her beloved grandchildren: Laurel Norris, Tara Sampson, Justin and Bradley Murphy, Kyla Brown, Stephanie Hassard, Lisa Corrigan, Jared Hassard, Kevin, Brian, Meaghan and Sean Murphy, Matthew, Stephen and Patrick Murphy, and 9 great grandchildren. Dorothy, also affectionately called “the little one” by family spent many happy times with them all at their beachouse parties where they will never forget singing around the player piano, playing volleyball, soccer, and croquet etc. Dorothy also loved sailing and swimming with Don, family and friends along Narragansett Bay. She and Donald enjoyed many years of round dancing as members of The Friendly Mixers round dance club locally and throughout New England and the many friends they made this way. The family is very thankful to the staff at St Antoine’s Residence and Hope Hospice of RI for the loving care she received from them during the last 19 months that kept her smiling. Funeral and burial in Quidnessett Cemetery in North Kingstown will be private.

Dorothy L. Murphy 90, a lifelong R.I. resident died peacefully on February 1, 2021. She worked in various specialties of nursing throughout her life as an RN and spent the last years of her career as a psychiatric nurse in Cranston until retirement.... View Obituary & Service Information

The family of Dorothy L. Murphy created this Life Tributes page to make it easy to share your memories.