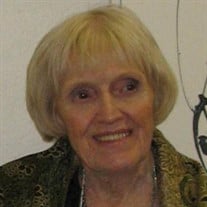 It saddens us to report that our mother, Ann Latham Daum, died on Friday, November 19th at the Miriam Hospital in Providence.  We were both by her side for the last few hours to the end. Those of you who met Ann know she was a complicated woman:... View Obituary & Service Information

The family of Ann Latham Daum created this Life Tributes page to make it easy to share your memories.

It saddens us to report that our mother, Ann Latham Daum, died...