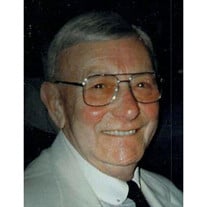 William J. Campbell, 94, of North Providence passed away on Monday, February 24, 2014. Born in 1919, the son of Adele (Bandeau) and William Campbell, Bill was raised by his fraternal grandparents Anne and Joseph Cooney in Brooklyn, New York. Bill was a resident of North Providence for over 56 years.Bill is survived by his beloved wife for 70 yrs, Evelyn (Saggese), his son, Marc of Worcester, MA and his partner Laurel Locke, his daughter Karen of New York City and her partner Lynn Hayes, as well as grandchildren David and Theresa Campbell, nieces and nephews, great nieces and nephews and six great-great nieces and nephews survive Bill. He was the brother of the late Robert P. Campbell.Bill spent his childhood in Bay Ridge, Brooklyn. He was a handball champ and swimmer extraordinaire at Coney Island. As a working class youngster he had many jobs in his youth. In his teens and twenties he worked as a longshoreman on the Brooklyn Docks and later as a Bell Hop at the McAlphin Hotel in Herald Square, NYC where Bill met Evelyn the love of his life. They married in 1944 while Bill was home on leave from the service.A member of the Greatest Generation Bill was a World War II veteran. As a Staff Sergeant of Platoon 651 he served with the 82nd Airborne and saw action in France, Belgium and Germany. He also was part of the units liberated Dachau Concentration Camp, Germany in April of 1945.As the State of Rhode Island DEM Firearms Safety Instructor Bill trained and qualified thousands of people to obtain carry permits in RI retiring in 1989. An NRA Qualified Firearm Instructor for over 25 years, holding a master classification, Bill was also the North Providence Range Officer for over 2 decades, qualifying the town police.Bill owned Campbell's Barber Shop in Centredale from 1960-1969. He was a North Providence Reserve Police Officer for over 10 years and an active member of the F. O. P. Bill worked for Rhode Island College Facilities/ Maintenance for nearly ten years until 1979.In the early 1960's Bill was an active member of St. Lawrence Parish as President of the Holy Name Society and ran the parish bingo. He served as president of the Club Dominicana at St. Pius Church in the early 1980's. Bill volunteered at North Providence Union Free Library and Providence College. Bill was a devoted husband and best friend to Evelyn, a wise and generous father to his children, a sweet and protective Grandpa to his grandchildren, and reliable Uncle Bill to his nieces and nephews. He was a deeply religious man always willing to help those less fortunate. Bill collected tools for every task, was very handy displaying inventive craftsmanship, and was always there to help others make home repairs.Bill will be greatly missed but we take comfort in knowing he had a long, happy and healthy life, an exceptional marriage, is no longer in pain and now resides with his Heavenly Father. Calling hours are respectfully omitted. A Mass of Christian Burial will take place Saturday at 10 am at Our Lady of Grace Church, 15 George Waterman Road, Johnston 02919 with burial at Highland Memorial Cemetery. In lieu of flowers donations to St Jude League, 205 West Monroe, Chicago, IL 60606 or a charity of your choice will be appreciated.

William J. Campbell, 94, of North Providence passed away on Monday, February 24, 2014. Born in 1919, the son of Adele (Bandeau) and William Campbell, Bill was raised by his fraternal grandparents Anne and Joseph Cooney in Brooklyn, New York.... View Obituary & Service Information

The family of William J. Campbell created this Life Tributes page to make it easy to share your memories.

William J. Campbell, 94, of North Providence passed away on Monday,...