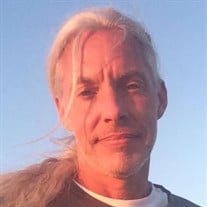 Stephen E. Doyle, Sr., 51, of Warwick, RI, passed away peacefully, surrounded by the love of his whole family on April 8, 2020. Steve grew up in East Haven, CT, and was a proud member of the CT Classics Jr. Drum and Bugle Corps. He raised his family with pride and joy on Cape Cod, Massachusetts. There, he became an accomplished electrician. Love of music was a thread that anchored Steve throughout his life, especially enjoying live shows. Sunsets and moon rises were cause for a pause, and he drew his positivity from facing the sun for a moment when the chance arose. He enjoyed taking eye-catching photographs with his smartphone. Steve leaves behind his unwavering partner, Peggy Harrigan, his much-adored children: Stephen Doyle, Jr., Satarra Dixon (Kenny), Marissa Doyle (Brandon Hurd), Cody Doyle, and Carina Barceline; and his two precious grandchildren, Riley and Eliana Hurd. He will be dearly missed by his loving mother, Darlene Tamburrino (Rudy), as well as devoted sisters, Deanna Picagli and Christina Centore; nephews: Daniel Picagli, Matt Picagli (Danielle), Luciano Martone; and niece, Jennifer Picagli (Justin); his beloved uncle, Thomas E. Kearney; his grateful mother-in-law, Marge Ratay; and many other relatives. Steve will also be lovingly remembered by the family of Bill and Lynn Thatcher, who were a constant source of love and stability. Steve truly never met a stranger, always showing a considered and inclusive empathy for anyone he met. Those became friends, and then those friends eventually would call him “Brother”. If there was ever a need, no matter how small or big, he would “be right there”, the tools would be in his vehicle, and he would stay as long as the task called for it. For anyone. For everyone. He is preceded in death by his father, James T. Doyle, and brothers-in-law: Daniel P. Picagli and Italo L. Centore, Jr. He was a consummate dog sitter and will be greatly missed by his nephew, Ruckus, and his own dogs, Azula and Uriel. Memorial services will be planned at a later date.

Stephen E. Doyle, Sr., 51, of Warwick, RI, passed away peacefully, surrounded by the love of his whole family on April 8, 2020. Steve grew up in East Haven, CT, and was a proud member of the CT Classics Jr. Drum and Bugle Corps. He raised... View Obituary & Service Information

The family of Stephen E. Doyle Sr. created this Life Tributes page to make it easy to share your memories.