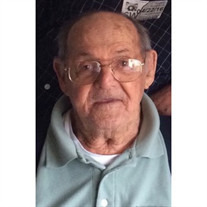 Robert Franklin Redman, father of nine passed away Sunday, July 16, 2017, he was 89 nine years old. Born in Frankfort, Kentucky in 1927 to Rosine and Allen Redman. He is survived by his children; Clifford(Barbara), Gary(Cynthia), Robert(Beverly), Thomas, Suzan Charlebois(Ronald), Linda Payne, Lori Santoro(Mike), Cindy Redman(Richard Castaldi), 13 Grandchildren, and eight great grandchildren. His wife Elsie and Son Ronnie were predecesed.He is survived by His Brother Allen Redman, sister Kathleen Masters, cousin Bub Hyatt, sister in law Pat Redman, and many nieces and nephews. Robert was very active as a coach for women's softball league in Warwick for over 20 years. He loved fishing and camping. He had an incredible memory, and could recall stories from eighty years ago as if they happened yesterday. He gave us a strong sense of family, and that will be with us all of our lives. He and his friend met their wives at Crescent Park during WW2, the wives were best friends. Both were married 30 days later and many said they would never last. Every July 3rd, both couples would talk to each other to see if they would make it another year, both couples survived 65 years together and mom and dad lasted 68 years. Dad took great pride in his family, and hopefully we will continue to make him proud, we will miss him. A memorial Service will be held at a later date in Frankfort, Kentucky were his and Elsie's ashes will be interned with their first born son. In lieu of flowers donations can be made to Corliss Institute 290 Main Street Warren RI 02885.

Robert Franklin Redman, father of nine passed away Sunday, July 16, 2017, he was 89 nine years old. Born in Frankfort, Kentucky in 1927 to Rosine and Allen Redman. He is survived by his children; Clifford(Barbara), Gary(Cynthia), Robert(Beverly),... View Obituary & Service Information

The family of Robert Franklin Redman created this Life Tributes page to make it easy to share your memories.