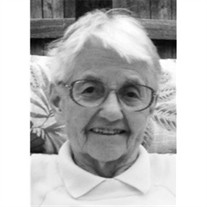 STETTLER, MATHILDE "TILDY", 92, of Hope, died peacefully at home with her daughter Myriam Stettler, on April 10. Born and raised in Switzerland, she became a nurse, working in labor & delivery, neonatal and pediatrics. She was the daughter of the late Otto and Mathilde (Hugentobler) Stettler, sister of the late Otto and Josef Stettler. She is survived by her brother Leo, and many nieces and nephews living in Switzerland. As a child she actually did walk to school (in the next town), 45 minutes each way, twice a day, up (and down) several hills. From November to March, she skied to school through the snow. She came to the United States by way of Ellis Island in January 1953 initially working as a nanny, then as a live-in caregiver for the elderly. She learned English at the YMCA in an ESL class. She became a naturalized citizen in 1963, and received her GED in 1974. Later in life she worked at Princeton Hospital, first in the coffee shop, then in the Anesthesia Department, until her retirement, all the while continuing to work with the elderly on weekends. She was a parishioner of St. Paul Catholic Church in Princeton, NJ for 58 years. She volunteered as a Eucharistic Minister, delivering communion every Sunday to persons unable to attend mass. She also volunteered with the St. Paul's Healthcare Ministry. After retiring from Princeton Hospital, she attended mass every day, weather permitting. She was selfless; always putting others first; and often made sacrifices for the benefit of others, never expecting anything in return. She was committed to her religion, always helping and caring for others. She made the world a better place for those she met throughout her life. She was a wonderful role model for her daughter, baking for school events, chaperoning school field trips, and volunteering as a Girl Scout Leader. She taught her daughter about community service by taking her along to help out at the annual Princeton Hospital rummage sale. She worked tirelessly gathering donated clothing, personal hygiene items, and medical equipment then enlisted her daughter to help her deliver the many carloads to Croatian Relief Services, her favorite charity, in Fairview, NJ, who help the poorest of the poor all over the world. She loved visiting her family in Switzerland, attending the weekly Spanish class at the West Windsor Senior Center, going to the West Windsor Library to find new books each week, and eating Swiss chocolate and cherries. In 2013 she moved to RI to be closer to her daughter. She will be remembered fondly and missed by all who knew her. Services will be held in Princeton, NJ. In lieu of flowers, donations may be made to Hope Hospice, 1085 North Main Street, Providence, RI 02904.

STETTLER, MATHILDE "TILDY", 92, of Hope, died peacefully at home with her daughter Myriam Stettler, on April 10. Born and raised in Switzerland, she became a nurse, working in labor & delivery, neonatal and pediatrics. She was the daughter... View Obituary & Service Information

The family of Mathilde "Tildy" Stettler created this Life Tributes page to make it easy to share your memories.