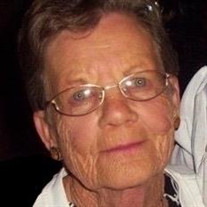 Marilyn R. (Tucker) Longo, of Springbrook Road, Westerly, RI, passed away on September 25, 2020. She was predeceased by her husband of 50 years, Armond S. Longo. She was an extraordinary homemaker, wife, mother and grandmother and retired from many years in the food service industry. She was the daughter of the late Ethel E. (Cummings) Tucker Grey and the late Timothy L. Tucker and stepdaughter of the late Paul G. Grey. Born in Herman, Nebraska, she lived for 37 years in Long Beach, California and moved to Stonington, Connecticut in 1977 and then Westerly, Rhode Island in 1992. She leaves her son, Lance A. Longo and daughter-in-law Bonnie Longo of Hopkinton, RI and her daughter Kelly J. (Longo) Vocatura, of Westerly and was also predeceased by her son-in-law, John F. Vocatura Sr. She also leaves behind her beloved grandchildren, Armond J. Vocatura of Westerly, RI and Saraya A. Longo of Groton, CT. She was predeceased by sisters Beverly Kubie of Blair, Nebraska and Patricia Hanson of Omro, Wisconsin. She is survived by three brothers, Stephen Tucker of Blair, Nebraska, Michael Tucker of Omaha, Nebraska and Timothy Tucker of Blair, Nebraska. She also leaves behind many nieces, nephews, cousins and friends. Marilyn was also an outstanding wife, mother and grandmother but most of all, she was our Mimi; our Mimi who loved her family to no end and would do anything for them, especially her grandchildren. She loved having family dinners and playing a good game of home bingo. Mimi loved watching her family laugh and a good day out for Mims was a little shopping and lunch. Mimi had a special little dog, Mia that she also took extra loving care of. Mimi was an extraordinary kind of grandmother but, she was also a special friend. She meant a great deal to her family and she will be sadly missed by us all. We love you Mimi. There will be no calling hours and services will be private.

Marilyn R. (Tucker) Longo, of Springbrook Road, Westerly, RI, passed away on September 25, 2020. She was predeceased by her husband of 50 years, Armond S. Longo. She was an extraordinary homemaker, wife, mother and grandmother and retired... View Obituary & Service Information

The family of Marilyn R. Longo created this Life Tributes page to make it easy to share your memories.