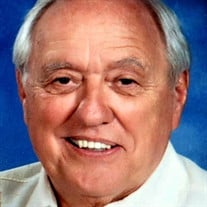 Lyle J. Metzger, 83, passed away on Friday, Aug. 27, 2021. Born on Jan. 14, 1938, in Claypool, Indiana he was the son of Joseph and Mamie Yonts Metzger. Lyle graduated from Silver Lake High School in the class of 1956. He joined the Army after high school, where he contracted polio. After fighting, and winning an 18-month polio battle, he went on to work at Miller & Sons, Wholesale Electric Company, Ace Hardware and then on to one of his favorite passions (cars), selling automobiles at Munson’s Chevrolet. However, his main occupation was selling insurance at C.V. Yeager and then on to start his own independent insurance business. Lyle is survived by his adored wife, Alice Feck Metzger: and his beloved daughters: Wende Corcoran and her husband Patrick, JoDeane Knowles and her husband Carl; sister, Norma Kirkwood and brother Leroy Metzger and his wife Ruby; and his cherished granddaughter, Eileen Knowles Nicola and her husband Scott; and great-grandchildren: Mason, Jackson, Dalton and Cameron. He had one brother, Harold Metzger; and his wife, Pauline, who proceeded him in death. Lyle was the “energy” in the room and his liveliness was infectious. He was the dad that made sure he had the “fun house” in the neighborhood by pulling everyone around on Halloween in a hay cart, building snow ramps on the hill for sledding and clearing out the furniture in the family room for dance parties. Lyle had a passion for classic Coke machines and classic cars and restored many of them over the years, winning two-garage full of trophies at numerous car shows, including a special invitation from Disney World to participate in a classic car parade. He loved his family, dancing, the outdoors, swimming, fishing, boating, mushroom hunting, making his famous “mush and eggs” for breakfast, spending time with his “buddies” and did someone say 50s music? Lyle loved to play it in his cars, dance to it anywhere, and reminisce about the “good ol days” while it played. Lyle lived life to the fullest, and as one song says he “owned every second that this world could give” and with every challenge life threw his way, he survived and found passion in his hobbies and joy in people. A celebration of life memorial service will be held in the future. ***** If you would like to make a memorial contribution in Lyle’s name, the family request donations be made to one of his favorite causes, the Wounded Warrior Project.

The family of Lyle J. Metzger created this Life Tributes page to make it easy to share your memories.