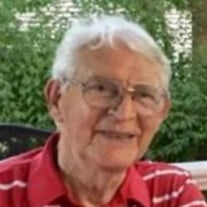 Louis Nielsen died peacefully on March 28, 2020 at the Hattie Ide Chafee nursing home in East Providence, RI, with his wife Martha and his daughter Sarah singing to him at his bedside. Song was a fitting farewell for a man whose greatest passion... View Obituary & Service Information

The family of Louis Nielsen created this Life Tributes page to make it easy to share your memories.