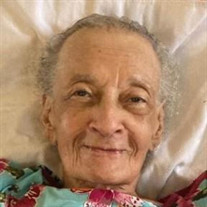 Juanita (Johnson) Caldwell, 91, of East Providence, RI mother, teacher, and minister of the gospel, died in her home on February 11, 2022. She was the devoted wife of Reverend Atwood A. Caldwell, Jr. Born in Selby, North Carolina, Juanita was the daughter of the late Henrietta (Floyd) Johnson. She lived in Selby, North Carolina, until 1942, when she and her family moved to Providence, Rhode Island. Juanita was a 1947 graduate of Hope High School in Providence. She lived in East Providence, RI, for 53 years. She retired from the Salvation Army Store, Pittman Street, where she worked as a salesperson for over a decade after raising her children. Juanita was a dedicated Christian and was ordained as a minister in 1982 by Mt. Zion Church of God, Inc. Providence, RI. She ministered with her husband, the late Rev. Atwood A. Caldwell, Jr., at various churches in Rhode Island, including Christ Temple and Apponaug Pentecostal Church. For over a decade, they were active, along with their son Atwood A. Caldwell, III, in prison ministry at the Adult Correctional Institution, Rhode Island. Neighbors fondly remember Juanita as an early morning gardener who shared the bounty of her fruits, vegetables, and flowers. She always had a word of encouragement where ever she went and prayed for her community, country, and American Indian boarding school children. She leaves a daughter, Dr. Naomi R. Caldwell of East Providence; two sons Michael Caldwell of East Providence and Atwood A. Caldwell III of St. Francis, South Dakota; six grandchildren and two great-grandchildren. She was the mother of the late Jeffrey D. Caldwell and sister of the late John Henry Johnson, Althea Brady, and Claude Johnson. A private graveside memorial service and burial will be held in Rhode Island Veterans Cemetery, Exeter. In place of flowers, the family request donations in Juanita Caldwell’s memory to St. Joseph’s Indian School, Chamberlain, SD, St. Labre Indian School, Ashland, MT, or Running Strong for American Indian Youth Alexandra, VA.

Juanita (Johnson) Caldwell, 91, of East Providence, RI mother, teacher, and minister of the gospel, died in her home on February 11, 2022. She was the devoted wife of Reverend Atwood A. Caldwell, Jr. Born in Selby, North Carolina, Juanita was... View Obituary & Service Information

The family of Juanita Caldwell created this Life Tributes page to make it easy to share your memories.