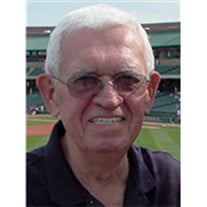 Joseph D. McLaughlin Jr., 83, formerly of Providence and Rumford, whose big personality, gift of connecting with people, and ability to tell boisterously funny stories, passed away at St. Elizabeth Manor, Bristol, on March 3, 2017. Joe was the husband of the late Lois Steiner McLaughlin, whom he loved and adored, and to whom he showed great devotion in her final illness. They were married for 55 years before her death in 2013.Born in Providence on June 9, 1933, he was the son of Joseph D. McLaughlin, Sr., and Florence Dealy McLaughlin, and the younger brother of Margaret McLaughlin and Florence Stein. Joe grew up on Roslyn Avenue in Providence, attended St. Pius School, and was a graduate of LaSalle Academy, class of 1951. He received his BS in Economics from the University of Rhode Island in 1955 and was commissioned as an officer in the US Army through ROTC. Joe served on active duty for two years, spending the majority of his time in Korea. He served in the Army Reserves for six years following his discharge in 1957. A salesman's salesman, Joe worked during his early career for Sears Roebuck in Framingham, Massachusetts, Montgomery Ward in Schenectady, New York, and the Wickes Corporation in Saginaw, Michigan. At that last position, he was the national sales director for appliances. Returning to Rhode Island in 1969, Joe was for 15 years the owner and operator of Heater Repair and Supply, a heating and plumbing wholesale business located in Providence and East Providence. For several years, he also operated an Irish import business. That business grew out of Joe and Lois™s trips to Ireland, a beloved destination.For the final twenty years of his professional life, Joe was an independent manufacturer's sales representative in the heating industry, working with businesses based both in the United States and Canada. His work took him across the country, and he was a well-known figure in home heating industry circles. His reach in New England in particular was extensive, and there was hardly a stove shop in the smallest village that he did not know or have a connection. Joe was a master storyteller whose humor was inclusive and never mean-spirited, and these qualities made his sales calls a welcome event.Married in 1957, Joe and Lois lived for 35 years in Rumford, where they raised six children, before retiring to Lady Lake, Florida, in 2004. During their years in Rumford, Joe was active in youth sports, volunteering for many years as a coach in the Rumford Little League. Their house was also a welcome and familiar destination for family and friends of all ages. Possessor of a half-glass full optimism that guided him through life's challenges, after his retirement Joe twice competed in the national Senior Games in both the 1.5K and 5K race-walk events.A believer in the wealth contained in families, Joe took pride in the successes of his children and was overjoyed by the arrival of his grandchildren. He is survived by Mark and his wife Laurel of Rehoboth and their children Catherine, Maisie and Tess; Micheal and his wife Amy of Brooklyn and their son Jasper; Kevin and his wife Cary of Manhattan and their son Dominic; Christopher and his wife Steff of Cary, North Carolina, and their children Jake and Lexi; John of Providence; and Kerrin Callahan and her husband Tom of Little Compton and their children Charlie and Lily. Arrangements will be private. The family cannot express enough gratitude to the staff of St. Elizabeth for the skill, sensitivity and love with which they treated Joe over the past year. Contributions in Joe's memory to St. Elizabeth Manor, 1 Dawn Hill Rd, Bristol, RI 02809, would be deeply appreciated.

Joseph D. McLaughlin Jr., 83, formerly of Providence and Rumford, whose big personality, gift of connecting with people, and ability to tell boisterously funny stories, passed away at St. Elizabeth Manor, Bristol, on March 3, 2017. Joe was the... View Obituary & Service Information

The family of Joseph D. McLaughlin, Jr. created this Life Tributes page to make it easy to share your memories.