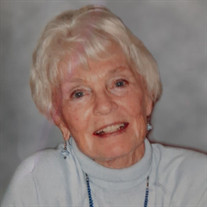 Jean Caroline Mueller, 94, died Saturday, April 3, 2021 in Sterling, Massachusetts. She was born January 21, 1927 in New Haven Connecticut, to Alice F. and William G. Mueller. She graduated from Wellesley High School in 1944; she received her Bachelor of Arts from Connecticut College for Women in 1948. Jean taught Art in Concord, Massachusetts Middle School. She received her Masters Degree in Fine Arts at Assumption University in Worcester, Massachusetts. She had a ceramic studio in Billerica where she created free-form stoneware pots, dishes, and garden sculptures, which she exhibited at juried craft shows and markets. She was also a talented painter in both acrylics and watercolors. Jean and her husband, James T. Burgess resided in North Kingstown, Rhode Island for many years. Jean was a devout Catholic, who sang in her parish choirs. She enjoyed landscape design and gardening, and loved dogs and traveling. She spent her summers in Prince Edward Island, Canada, and many Januarys in Puerto Vallarta, Mexico, where she continued her watercolor painting and worked to perfect her command of Spanish. Jean was an avid walker, which she enjoyed well into her 80's. Jean is survived by her brother, William F. Mueller, of Bradenton, Florida, her daughters, Leslie Ann (Bernard) Paul, of Henniker New Hampshire, Lisa Jean (Bernard) Robinson, of Harvard, Massachusetts, Helene “Nina” (Bernard) Schumann, of Miami Beach, Florida, and Nancy Ellen Bernard, of Milwaukie, Oregon, her granddaughters, Sage Risteen and Emily Chandler of Rockland Maine, Stephanie Simpson of Jujuy, Argentina, and Faith Kenyon, of Miami, Florida, and five great-grandchildren. We would like to thank our sister and brother-in-law, Lisa and Doug Robinson, for everything they did for our mother during the years of her heartbreaking decline with vascular dementia. Their unfailing devotion assured Jean of the best possible care and dignity as she lost control over her life. A Memorial Service will be held in June at time to be announced in St. John the Evangelist Church, Wellesley. Burial will follow at Woodlawn Cemetery, Wellesley, MA. In lieu of flowers, the family suggests making a donation to the Alzheimer's Society of Rhode Island.

The family of Jean Caroline Mueller-Burgess created this Life Tributes page to make it easy to share your memories.