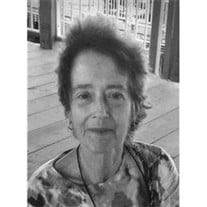 Iris Falck Donnelly 68, of Narragansett, RI passed away on September 12. Iris was the daughter of Selma (Katz) and Daniel Weidenfeld, wife of Charles Donnelly of Narragansett, mother of Emmanuel Falck of Providence and Maya Falck and grandmother of Sabine Pale of New York City, and friend of many. Iris was born on October 16,1948 in New York City and grew up in Highland Park, New Jersey. A strong believer in education and lifelong learning, Iris earned a B.A. in Spanish and French from Cedar Crest College, a diploma from Univesity; de Caen (France), and a Masters of Arts in Teaching from Brown University. She spent most of her career with the Providence School system, first as a bilingual (Spanish) kindergarten teacher and many years as a bilingual special ed resource teacher. Iris also taught high school French and Spanish in Smithfield, RI and Johnston, RI. A talented photographer, Iris captured award-winning images of a wide array of subjects, people, and places. Iris Donnelly's artwork was a reflection of her worldview. A multicultural life showed her the common threads that unite us all. A lover of art, she photographed to show the truth. Iris took photographs throughout the world including France, Guatemala, Dominican Republic, Nicaragua, Cuba, Morocco, Northern Ireland, and Israel. She was also the photographer for the Chappaquiddick Tribe of the Wampanoag Nation for 13 years at their annual gathering in Marthas Vineyard. Iris was bestowed with the name of Radiant Vision by the tribe. She cared deeply about social justice and was a member and former chair of the Social Action Committee of the Unitarian Universalist Congregation of South County in Peace Dale, Rhode Island. She was involved with Providences Sister City Project in Niquinohomo, Nicaragua during the Contra War and helped build a health clinic and school in Niquinohomo with Providences Sister City Project. Iris volunteered for El Porvenir in Nicaragua bringing water to a rural village. She also went to Guatemala as a translator with a team from Rhode Island which provided medical and dental care. Visiting rural Mayan villages, she worked with a local who would translate from Mayan to Spanish and Iris would translate from Spanish to English. After retiring from the Providence School system, Iris became a volunteer at the Sophia Academy which is a school for young women from underserved communities in Rhode Island. She also ran a documentary film series in South County and volunteered in adult literacy programs. A celebration of Iriss life will be held at the Unitarian Universalist Congregation of South County, 27 North Road, Peace Dale, RI on Saturday, October 7 at 11:00 a.m. In lieu of flowers, memorial contributions may be made to the Sophia Academy, 582 Elmwood Ave., Providence RI 02907.

Iris Falck Donnelly 68, of Narragansett, RI passed away on September 12. Iris was the daughter of Selma (Katz) and Daniel Weidenfeld, wife of Charles Donnelly of Narragansett, mother of Emmanuel Falck of Providence and Maya Falck and grandmother... View Obituary & Service Information

The family of Iris Falck Donnelly created this Life Tributes page to make it easy to share your memories.

Iris Falck Donnelly 68, of Narragansett, RI passed away on September...