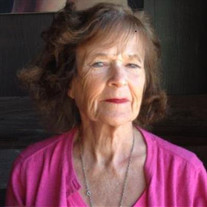 Grace Sheppard Steele died peacefully in her bed Oct. 29 in Middletown, RI. She was 84. Born Dec. 16, 1934, Grace was raised in Collingdale, PA. She loved art and travel, and her passport stamps included China, India, the USSR, Paris, Peru and Hong Kong. As a young woman, she sailed on the Queen Mary to England and lived there for a time. Later, after her children were older, Grace enrolled in a summer program at the Sorbonne in Paris, where she lived in the dorms and studied French. A mother of four, Grace showed her children by example to value education, work and individual achievement. She also taught them to appreciate music and culture, finding the money on a tight budget for music lessons for all and dance lessons for the girls. She was proud that all four did well in school and went to college. Grace loved outdoor adventure and was a dedicated hiker. In her later years, she hiked Zion National Park and the Canadian Rockies with her daughter Jeanette and, with one of her beloved touring groups, she bested the steps of Machu Picchu. An amateur artist, she covered several walls in her house with murals and even tried her hand at woodworking. Life was not always easy for Grace. Her husband of 41 years, Dale, was diagnosed with early-onset Alzheimer’s disease in his 50s. She cared for him at home until his death more than a decade later. Tragically, their eldest son, Dale Keith, was killed in a highway collision while still in college. Despite this heartbreak, Grace was known for her cheerful attitude and zest for life. She leaves behind son Robert, daughter-in-law Therese and grandson Austin in Arizona; daughter Rosemary and son-in-law Scott in Europe; daughter Jeanette and son-in-law Kurt in Rhode Island; and three sisters, Roberta and Alice in Pennsylvania and Anita in Delaware. Grace will be buried next to her husband in Indian Springs Cemetery, a historic cemetery near her longtime home of Grass Valley, CA. A celebration of life will be held graveside in the spring. We loved you, Mom, and we will always miss you.

Grace Sheppard Steele died peacefully in her bed Oct. 29 in Middletown, RI. She was 84. Born Dec. 16, 1934, Grace was raised in Collingdale, PA. She loved art and travel, and her passport stamps included China, India, the USSR, Paris, Peru and... View Obituary & Service Information

The family of Grace Sheppard Steele created this Life Tributes page to make it easy to share your memories.