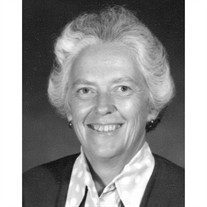 Georgia Francis Parsons was born September 10, 1925 in Lewiston, Maine. She was the daughter of George and Luella Parsons. She graduated from Edward Little High School in Auburn, Maine in 1943 and the University of Maine, Orono in 1947.She met Pennell S. Eustis, a US Army veteran at UMaine on the GI Bill, in the fall of 1946. They were married June 28, 1947. She worked at Bangor Hydro Electric Company until his graduation in 1950 and in a similar position at Western Massachusetts Electric Company in Springfield, Massachusetts while he pursued a graduate degree.Her next job was as a full time mother to her three Baby Boomer children and a part time teacher in various schools. Penn™s career moved the family from Massachusetts, Maine, New York and finally to Rhode Island. Georgia earned her Masters degree from Rhode Island College in 1967. She taught sixth grade language arts and social studies in the town of Barrington, Rhode Island until 1989.Georgia was a dedicated educator. She worked summers creating a common state curriculum with the RI Board of education, she was in Delta Kappa Gamma where she served in multiple positions and was a mentor to many student teachers through her connections with Rhode Island College and Roger Williams College.Upon retirement, Georgia and Penn became snowbirds. They bought a home in Winter Haven, Florida the home of the chain of lakes and Cypress Gardens. They were loyal fans of the Boston Red Sox and the Cleveland Indians when they had their spring training there. Georgia was very active in the community. She volunteered teaching literacy to single mothers; she was also a docent at Bok Towers, held many positions in the Cypress Landings Association and was active in the church. Her favorite hobby was playing bridge and other table games with her friends and family.Penn passed away after 63 years of marriage in 2009. His last years were clouded by dementia but Georgia was devoted to him. As she had done with her children, both those she bore and those she educated, she encouraged him and cared for him. Her kindness was her hallmark and her intelligence was inspirational. She was truly interested in the lives and well-being of all people she knew and met.She will be missed by her children who loved her as she loved them. They are Scott Eustis of Lewiston, Maine, Steve (Debbie) Eustis of North Attleboro, Massachusetts and Penney (Jeff) Hanson of South Kingstown, Rhode Island. She leaves six grandchildren, Robert (Kristin), Andrew and Jack (Sara) Hanson and Matt (Helen), Ashley and Tom Eustis. She is survived by her sisters in Maine, Jane Norris, Florence Hansen and her sister-in-law Maribeth Parsons. She was predeceased by her grandson Tyler Eustis and her brother John Parsons. Funeral will be private. In lieu of flowers donations would be appreciated to Hope Hospice and Palliative Care at 1085 North Main Street, Providence, RI 02904. They provided wonderful care to Georgia and so many others. Georgia Francis Parsons Georgia Francis Parsons

Georgia Francis Parsons was born September 10, 1925 in Lewiston, Maine. She was the daughter of George and Luella Parsons. She graduated from Edward Little High School in Auburn, Maine in 1943 and the University of Maine, Orono in 1947.She met... View Obituary & Service Information

The family of Georgia Francis Parsons created this Life Tributes page to make it easy to share your memories.