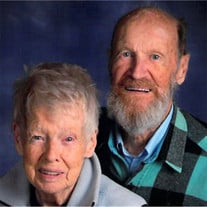 George Emil Thoman 96, of Foster, R.I. passed away peacefully at his home surrounded by his children on Sunday, October 1, 2017.George was number five of eleven children born to Albert and Eugenie (Tardiff) Thoman. He was two months old when his family moved from Pawtucket to live and farm in Foster. He attended the one room school house in Foster Center and then Coventry High School. He trained at the R.I. School of Design to become a tool design draftsman which opened the door for his career of more than thirty years with the Brown and Sharpe Manufacturing Company. Towards the beginning of WWII, and again the year after he married, he was interned at the Wallum Lake Sanitarium for suspected tuberculosis. These were formative years during which he developed skill at handwork and a contemplative mindset. There was virtually nothing he could not do, make or fix. Through his life's many adversities, he remained a strong man who lived with hope, purpose, determination and creativity.George met the woman, Molly, who would become his wife of sixty-three years while dancing at Rhodes on the Pawtuxet. They built their house in Foster in 1954. George worked hard and was a good provider but will be most remembered for his devotion to family and home. His wife and children were at the center of all that he did. He raised and taught his children well, sharing his love of adventure in the Great Outdoors and his diligent work ethic. As the years went by and grandchildren came along, he loved all the new little faces around the table and the lively, rolicing times that reminded him of earlier years. He was a good neighbor, ever mindful of those less fortunate than himself, and took joy in the life that was given him.George is survived by his sister, Carol Kennedy of CT, and his brothers, Wilfred of OK, and Douglas of R.I. A memorial gathering will be held on Sunday, November 19, 2017 at his home in Foster. Cards of remembrence may be mailed to: The Thoman Family, 111A Central Pike, Foster, R.I., 02825.Mary "Molly" Lois (Kneeland) Thoman 87) of Foster, R.I. died peacefully at home, surrounded by loving family, Thursday January 26, 2017. She was vibrant and active until a few days prior to her death.Born in Cranston, R.I., she was the last of four daughters born to Harmon B. and Sarah E. (Allen) Kneeland. She graduated from Cranston High School and the Roger Williams General Hospital School of Nursing. Molly worked for many years as an R.N., returning to her profession after raising a family and served for nearly forty years as Treasurer for the R.W.G.H. Nurses Alumnae. Although she claimed to be "painfully shy", her early years were filled with a bold, adventuresome, playful spirit. She was a life long Unitarian Universalist and considered herself a "free thinker". She met George E. Thoman while dancing at Rhodes on the Pawtuxet. They married in 1953, built their house in Foster, R.I., and enjoyed a simple country life. At a time when modern women were becoming liberated and joining the workforce, Molly found her liberation at home, embracing her role as wife, mother, and homemaker. She was a good and devoted mother, giving her children all the old fashioned joys of childhood. She "decided to be happy" and could make something special out of almost nothing at all. Everything was home made, from school lunches to Easter dresses to the quilts on the beds. She sewed, and cooked, and sang, and walked, and played with her children. Her family was at the center of her life. She loved all things in nature and quartz stones. She enjoyed travels with her husband when the children had grown. She took an active interest in the world around herself and lived with the conviction that every person should make a positive difference in their local community. Everyone in town knew her. She became an icon at the Foster Fair in her patchwork dress. When at last she became "Grandma Molly", she greeted each new life with genuine interest and unbridled love and enthusiasm. Devoted wife, mother, grandmother, and caregiver, she will be dearly missed by all those whose lives she touched. She is survived by her sister, Sally Ann (Spencer) Deatcher of East Greenwich, R.I.George and Molly were predeceased by their young son, Stuart Barney Thoman. Their surviving children are Roger B. Thoman (wife Cyndi) of Foster, R.I., Marjorie A Thoman-Lomas (husband Mario) of Sonora, CA, Diane M. Cano (husband Luis) of Norwalk, CT, and Martha L. Thoman (partner Robert T. Thurber, Jr.) of Foster, R.I. They had ten grandchildren (Randy, Kevin, and Aaron Shelton, Amitola, Autumn, and Aurora Lomas, Alex, Daniel, and Julian Cano, and Eryk Thoman-Thurber) and three great grandchildren (Anthony Beaulieu, Dylan and Natasha Shelton) all of whom were their heart's delight.

George Emil Thoman 96, of Foster, R.I. passed away peacefully at his home surrounded by his children on Sunday, October 1, 2017.George was number five of eleven children born to Albert and Eugenie (Tardiff) Thoman. He was two months old when... View Obituary & Service Information

The family of George E. Thoman created this Life Tributes page to make it easy to share your memories.