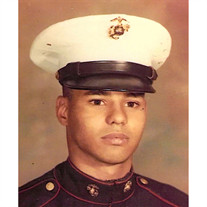 George W. Barber Sr, 66, a lifelong resident of Pawtucket, RI, died peacefully on Wednesday November 16, 2016 surrounded by his family. He was born in Providence on January 19, 1950 to George Barber and Esther P. Barber (Roderick). As a young boy, he spent much of his time at the Boys and Girls Club of Pawtucket where he excelled in boxing as well as other sports. In 1967, at the age of 17, he answered the call to serve his Country and enlisted in the Marine Corps. After his honorable discharge, he returned to his hometown of Pawtucket. George always felt his best years were working as an EMT for Costigan & Sons Ambulance Service. But he was also very active in his community, he was instrumental in organizing the Woodlawn Little League where he also served at president. He was a neighborhood representative on the BVCAP board. And he was one of the first minorities to hold an elected office in Pawtucket when in 1988 he was voted to the Democratic Ward Committee in Ward 4. George always wanted to see more being done to improve the quality of life with in the city.He is survived by his 3 children, George W. Barber Jr., his wife Renee, Edward P. Barber, his wife Kristin, and Mary Ann Barber. His 3 surviving brothers, Rodney Barber his wife Katia, Richard Barber his wife Darlene, John Beltran, as well as his late brother Calvin Barber and his former wife Janet Vessella. His 10 grandchildren, Isaac, G. Nicholas, Seth, Nathan, Edward, Craig, Jalyn, Joseph, Gabriella, and Rui. As well as countless nieces and nephews. Services will take place at St Mary Church on Pine St in Pawtucket promptly at 9:45am on Monday, November 21, 2016. Interment will immediately follow at Mount Saint Mary Cemetery on Prospect St., Pawtucket.Family is asking in lieu of flowers donations be made to Hope & Hospice, Main Street in Providence and/or St Mary Church in Pawtucket on George's behalf.

George W. Barber Sr, 66, a lifelong resident of Pawtucket, RI, died peacefully on Wednesday November 16, 2016 surrounded by his family. He was born in Providence on January 19, 1950 to George Barber and Esther P. Barber (Roderick). As a young... View Obituary & Service Information

The family of George Walter Barber, Sr. created this Life Tributes page to make it easy to share your memories.