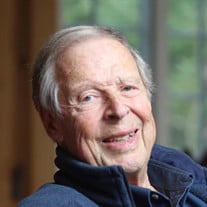 Elisha Winthrop Hall Jr., age 86, passed away peacefully on October 2, 2021 at home in Little Compton, RI surrounded by his family. Win was born April 8,1935 in Scituate, MA to Elisha Winthrop and Thalia (James) Hall. Win graduated from Milton Academy ‘53 and Harvard University Class of ‘57. He also served in the U.S. Air Force Reserves in his early twenties. After graduating from Harvard and upon his father’s death, he took over the family business, F.L. & J.C Codman Company, as president and C.E.O., which he ran until the company was sold in 2006. During his time at Codman, he also applied for and held several patents related to the company’s product line of buffing and grinding wheels and special machinery. In addition to running Codman, he also managed the rental of 150 artist studio spaces out of the historic Emerson Shoe building where the Codman factory was housed. He was passionate about offering an affordable space where artists could practice their trade, and continued managing the studios after the sale of Codman and until the building ultimately was converted into apartments. A true Renaissance man with insatiable curiosity, Win had several interests beyond the factory. Anyone who spent time with Win was keenly aware of his passion for music. He was the drummer for the jazz band he founded, Bluesberry Jam, and could be heard many summer weekends at weddings and other “gigs”, which always included the annual UCC church fair in Little Compton. Friends and family fondly remember spending hours listening to music with Win in any number of places, and it was difficult to escape a visit to Win’s home without spending a few minutes hearing a favorite recording in his home music room. And music was not all Win loved. He had a garage full of antique cars, and old military vehicles and other machinery could be found in unlikely places on the lawn or in the woods surrounding his house. One of his favorite party tricks involved firing up an old steam engine in the yard and popping a mint julep cup off the steam pipe. He loved collecting art and other unusual artifacts and then enthusiastically shared stories about the acquisition and history of each item. History was also a passion, which he indulged as an avid reader of military history and watcher of The History Channel. Win was a quintessential gentleman and a good friend to many. He was “kinder than necessary” and always willing to lend a hand to friends or total strangers. He had an extraordinary ability to make people feel heard and appreciated. Win was an enthusiastic storyteller, yet enjoyed hearing and learning from other people’s stories as much as he enjoyed telling his own. He had an infectious and irreverent sense of humor, and liked to focus on the positives and joys of life. He found great pleasure in sitting with old friends reminiscing about his days at Harvard and his summer house on the Cape. One of the great joys of his life was spending time with his family and close friends. Win was a former trustee of the Goff Society, The Country Hen, and South Shore Conservatory; former director at Rockland Trust and Independent Bank; a member of Sakonnet Yacht Club, Sakonnet Point Club, Sakonnet Golf Club, Warren's Point Beach Club, Newport Reading Room, Little Compton Historical Society, Sakonnet Preservation Association, Little Compton Community Center, United Congregational Church of Little Compton, and Chestnuts Investment Group; and a former member of The Country Club in Brookline, MA. Win is survived by his partner of almost three decades, Anne Tillinghast, and her family; daughter Elizabeth Barnett (Lisa) Hall of Bar Harbor, ME, and son Winthrop Tilden (Tony) Hall of Westbrook, ME; his sister, Lela Whitmer of Dallas, TX; and granddaughter Matilda Elizabeth Allen of Bar Harbor, ME. A musical celebration of life will be held in Spring of 2022 in Little Compton, RI. In lieu of flowers, the family suggests contributions in Win’s memory to Sakonnet Preservation Association https://sakonnetpreservation.org, the Little Compton Community Center www.lccenter.com, South Shore Conservancy https://sscmusic.org, or Milton Academy https://www.milton.edu.

The family of Elisha Winthrop Hall, Jr. created this Life Tributes page to make it easy to share your memories.