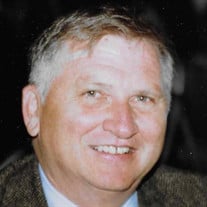 Edward “Tom” Johnson, 82, of Sarasota, Florida and formerly of Warwick, RI, died Thursday, July 12, 2018. Mr. Johnson is the husband of Katherine Johnson. Born in Jersey City, NJ, he was the son of the late Edward Johnson Jr. and the late Eleanore Johnson. Besides his wife, he leaves a son of New York City; two daughters, Diane (Jeffrey) Chaplin of Warwick, RI and Susan Johnson of Massachusetts; a sister, Joan Young of Cherry Valley, NY; two grandsons, Ryan Johnson of West Warwick, RI and Kyle Adams of Warwick, RI and one great grandson, Jayden Johnson of East Greenwich, RI. Mr. Johnson graduated from William L. Dickinson High School in Jersey City, NJ. He was a photoengraver and attended the New York School of Printing. He worked for twenty-five years at the Providence Gravure before becoming President of Local 239M of the Graphic Communications International Union. He was on staff with the R.I. AFL-CIO for two years and then served as International Representative for the G.C.I.U. headquartered in Washington, DC until he retired in June 2000. He was a member of the Providence Central Labor Council AFL-CIO for 33 years and served on its Board of Trustees for 10. He was elected to the 33rd Democratic Representative District Committee in 1976 and served until 1980. He was elected to the 15th Democratic Senatorial District Committee and served as its Chairman from 1980 to 2003. He was elected to the Democrat 2nd Ward Committee 1998 and also served on the Warwick Democrat City Committee. Mr. Johnson served on Warwick Mayor Eugene McCaffrey’s Athletic Council which oversaw the building of Thayer Arena and the Athletic Complex. He served on Warwick Mayor Joseph Walsh’s Recreational Advisory Committee. He served on Governor Garrahy’s Labor, Management & Government Partnership Committee. Mr. Johnson was captain of the Jersey City Junior College Baseball team. He played semi-pro baseball in the Hudson County Semi-pro Baseball Leagues. He managed and coached baseball in the Rhode Island Amateur League (Tim O’Neil League) and was Commissioner from 1968 until 1980. He was a morse code radio operator in the U.S. Army and played Division Baseball for two seasons while stationed in Germany. He also coached the High School Baseball Team of the military’s dependent children stationed on the base. Mr. Johnson was a Shriner and a member of Thomas Smith Web Lodge A F & M. A celebration of Tom’s life will be held at Pilgrim Lutheran Church, Warwick, RI on August 5, 2018 at 2:00 p.m. The wearing of patriotic, Red Sox and/or baseball attire is welcomed and encouraged. The funeral will be private. In lieu of flowers, Tom’s family requests donations in his memory to Tidewell Hospice at Philanthropy Department, 5955 Rand Boulevard, Sarasota, FL 34238 (tidewellhospice.org) or Shriners Hospitals for Children - Springfield at 516 Carew Street, Springfield, MA 01104 (lovetotherescue.org).

Edward &#8220;Tom&#8221; Johnson, 82, of Sarasota, Florida and formerly of Warwick, RI, died Thursday, July 12, 2018. Mr. Johnson is the husband of Katherine Johnson. Born in Jersey City, NJ, he was the son of the late Edward Johnson Jr. and... View Obituary & Service Information

The family of Edward "Tom" Johnson created this Life Tributes page to make it easy to share your memories.

Edward “Tom” Johnson, 82, of Sarasota, Florida and formerly of...