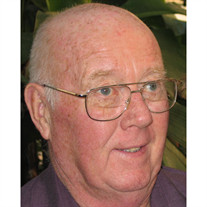 David Clarence Mann, September 2, 1934 February 22, 201479 years of age, David passed away at home surrounded by his loving family on February 22, 2014. He was the devoted husband of Judith Baird Mann for 59 years. David was born in Attleboro, Massachusetts, the son of Clarence Hector Mann and Rebecca P. McGovern Beller. He was a salesman of industrial gases and welding supplies for 40 years, retiring in 1998. He was an avid bowler in various leagues throughout Rhode Island and Massachusetts. David enjoyed square dancing and was a member of the McColl Twirlers for 20 years. He was a frequent blood donor at the Rhode Island Blood Bank and donated over 1,000 pints during his lifetime. He was a veteran of the Korean War where he served as a radio operator. David was honorably discharged from the Army in 1956 and later served as a recruiter in the Army Reserve for 10 years. David was a member of St Theresa Parish in Pawtucket. In addition to his wife Judith, David is survived by 5 sons and daughters-in-law: Frank & Brenda of Pawtucket, Michael & Lorraine of Woonsocket, Jeffrey & Kyong of Connecticut, Dennis & Dawn of Pawtucket, Timothy & Lisa of New Hampshire and was predeceased by daughter Rebecca. David was truly beloved by his 9 grandchildren, 8 great-grandchildren and several nieces and nephews. He was the brother of Edward Mann of North Attleboro, the late Ronald Mann of Cumberland, the late Robert Mann of Providence and the late Timothy Goodinson of Attleboro. A funeral mass will be held at St. Theresa Church on Newport Avenue in Pawtucket, Rhode Island at 10am on Monday, March 3, 2014, followed by a funeral procession to Highland Memorial Park in Johnston, Rhode Island where a graveside service with Military Honors will take place. In lieu of flowers, David requested that donations be sent to: Gentiva Hospice Foundation, 3350 Riverwood Parkway, Suite 1400, Atlanta, GA 30339 or online at www.gentivahospicefoundation.org or VA Medical CenterVolunteer Services 830 Chalkstone Avenue, Providence, Rhode Island 02908

David Clarence Mann, September 2, 1934 February 22, 201479 years of age, David passed away at home surrounded by his loving family on February 22, 2014. He was the devoted husband of Judith Baird Mann for 59 years. David was born in Attleboro,... View Obituary & Service Information

The family of David Clarence Mann created this Life Tributes page to make it easy to share your memories.