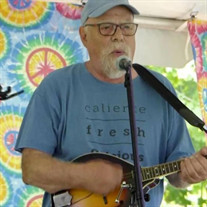 David Haller, 75, of Hudson Street in Providence, died on November 27th at Miriam Hospital in Providence. David was born in Northampton, Massachusetts, on August 15, 1945, the son of William and Ruth (Grossman) Haller. He had been a resident of Providence for the past 15 years. He is survived by his wife, Dorcas (Woodbury) Haller, his friend, partner, and traveling companion for the past 55 years. He is also survived by his two sons, Tobias Haller, of Providence, Rhode Island and Tristram Haller, of Copenhagen, Denmark; his brother, Benjamin K. Haller, of Venice, California; his daughters-in-law, Lizzie Araujo Haller, of Providence, and Barbara Budtz Haller of Copenhagen; his seven grandchildren -- who were his pride and joy -- Amanda, Silas, Olivia, Nora, and Tobias (Copenhagen), Ruby and George (Providence); and a large circle of extended family and friends. He and his wife met at the University of Rhode Island in 1964 and they married in 1966. In 1967, they set out for Copenhagen, where David studied cabinet-making and later worked as a carpenter and furniture maker. He was one of the original members of the Danish work collective, 1st Maj Kollektiv. David and his family returned to Rhode Island in 1980, where he worked as a ship builder at a local shipyard for many years. In the early 1990s, David returned to the University of Rhode Island to complete his undergraduate studies and went on to earn a master’s degree in Labor and Industrial Relations in 1995. After some years in the Affirmative Action office of URI and as personnel director for the Narragansett Indian tribe in Charlestown, David began a late career as a grip in the New England film industry. He was an active member of IATSE (International Alliance of Theatrical Stage Employees) Local 481, serving on the executive board as representative for Rhode Island IATSE members. He retired from film work in 2013, but remained a proud union member until his death David’s lifelong passions included music, social justice, and traveling and meeting new people. He had a great love, and knowledge, of old folk, jug band, and country blues music. He was an accomplished guitar and mandolin player and singer in those styles. He was a member of the K C Moaners Jug Band. He loved playing music with his fellow volunteers and campers at the annual Rhythm & Roots Festival in Charlestown, RI for over thirty years. He also volunteered for a couple of years at the annual Telluride Bluegrass Festival in Colorado with his brother, Ben. His interest in social justice led him, as a student in 1965, to hitch-hike with a friend to Selma, Alabama, to participate in one of the Selma to Montgomery marches. He was a strong advocate for racial justice in public schools in Providence, and served on the Providence Public School Department’s community advisory board. He was also an active member of WBNA (West Broadway Neighborhood Association), concerned with issues of gentrification. Travel allowed David to build a life, raise a family, acquire a new language, and make lifelong friends in Copenhagen, Denmark. He often traveled to England and Spain to visit friends. In August 2008, he and a friend traveled with a brigade from Pastors for Peace to help rebuild a hurricane-damaged school. He made two more trips to Cuba -- in 2016, with the Danish-Cuban Friendship Brigade and, in 2017, with his whole family to celebrate Christmas and New Year in Havana. Last year, he and his wife studied Spanish at the University of Granada, in Spain, for a semester and spent much time with their close friends in that city and in the village of Acequias in the Lecrin Valley. Over the years David also traveled to Hungary, Colombia, France, and Viet Nam. David made friends easily, and had friends everywhere. He was a fond husband, a good father and an adoring grandfather. He was known for his easygoing personality, his interest in others, and his zest for life. He was a good man whose absence will be felt forever by his family and his vast, international network of friends. Because of the current public health conditions, a celebration of David’s life will be scheduled for a later date. In place of flowers, donations may be made to the Rhode Island Community Food Bank at 200 Niantic Avenue, Providence, RI 02907 or at https://rifoodbank.org/give-now/, or at your local food bank.

David Haller, 75, of Hudson Street in Providence, died on November 27th at Miriam Hospital in Providence. David was born in Northampton, Massachusetts, on August 15, 1945, the son of William and Ruth (Grossman) Haller. He had been a resident... View Obituary & Service Information

The family of David Haller created this Life Tributes page to make it easy to share your memories.

David Haller, 75, of Hudson Street in Providence, died on November...