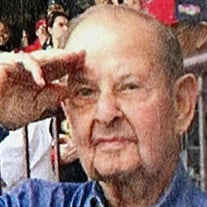 When Staff Sergeant, Dave Mann, who died April 11th, was fighting in WWII as a Combat Engineer under the command of General George Patton, he and his squad stopped at a vacant farmhouse in France to find much needed rest. Suddenly an enemy shell from an 88 tore through the farmhouse, killing every member of the squad, leaving just Dave as the sole survivor. For the next 75+ years Dave wondered why he was the only one who lived. This is why. Dave was born in Chelsea, Massachusetts, graduated from Emerson College in Boston, and began what was to be a successful and rewarding 30 year broadcast career as a Morning Man at radio stations in the Boston area, New Hampshire, New York, Worcester, and most recently at WBLQ in Westerly where he enjoyed co-hosting the lifestyle show "Mann About Town" with his wife. During those years he also was a much sought after voiceover talent and recorded commercials, books, and travelogues locally, regionally, and nationally, winning a CLIO award (equivalent of the Oscar for radio commercials) nomination for Better Homes & Gardens Real Estate Service. However, what made him proudest was being a member of what Tom Brokaw called "The Greatest Generation," those selfless soldiers who fought in WWII without rancor or complaint because it was their job to keep America free. Dave never thought he did anything special although he was much decorated, including being awarded three Purple Hearts for injuries incurred in battle. He had an intense love of the American flag and honored it in every way possible including writing a book, "What I Fought For," then touring the country to lecture to schools and other groups because he felt he was a living history book, and he wanted people to continue telling the stories of their own veterans to their children so our history would never die. In addition to his radio career, Dave also served for a short time as public relations consort for New York State Senator John Hughes before moving on to managing one of the four big FM stations in the Wertheimer owned Empire State FM Network which extended from Buffalo to Albany. It was at that time in the early '70s that he hired a young girl named Rona who hadlittle radio experience, so he took her under his wing where she remained for 45 years while he showed her the ropes. He did not realize at the time she would become his future wife...but not until 1983. Dave was not exactly a fast mover! Together Dave and Rona opened an advertising agency in Syracuse, NY specializing in radio and TV commercials. Eleven years later, they left Central New York and moved to the Midwest where Dave once again became a Morning Man in Ohio. After subsequent broadcast stints at news-talk stations in New Hampshire and Worcester, the couple found Westerly and the former WERI and have lived in the area since 1986. Military and community service were always paramount. In New York Dave was a major volunteer for the Onondaga County Chapter of the American Cancer Society, President of the Syracuse (Eastwood) Rotary Club, and a very active member of the Military Order of the Purple Heart, eventually becoming Chapter Commander. He was a lifetime member of that organization nationally in addition to being a lifetime member of the DAV and is enshrined in the National Purple Heart Hall of Honor in New York. In 2017 he was delighted and humbled to be selected to travel with his friend, Joe Nigrelli, and a few other area veterans on the Honor Flight to Washington, DC to see the monuments dedicated to their service. That same year The Pawsox honored Dave as part of their "In Debt to a Vet" program, with the entire stadium standing in tribute, and the Westerly Armory had chosen him as one of their four Honored Citizens to be feted this August. Although it will be posthumous due to postponements because of Covid, a small, private luncheon honoring these four was held last summer and Dave was so proud to have as his special invited guest, Dr. Tom Lanna. Their relationship always cut very deep, and he felt honored to have Dr. Lanna there. Dave leaves his wife, business partner, partner in life, craziness, and ongoing adventures, Rona, and his much loved and most annoying cats, Greenberg and Boeheim. According to his wishes, there will be no funeral nor calling hours, but also according to his wishes, there will be "a big party on July 31st (his 96th birthday), and they better say nice things about me!" So, why was he the only one who survived that attack on the farmhouse? That's why. It was a great run. Donations may be made in Dave's name to the American Flag Committee, 83 Potter Hill Road, Westerly 02891.

When Staff Sergeant, Dave Mann, who died April 11th, was fighting in WWII as a Combat Engineer under the command of General George Patton, he and his squad stopped at a vacant farmhouse in France to find much needed rest. Suddenly an enemy shell... View Obituary & Service Information

The family of Dave Mann created this Life Tributes page to make it easy to share your memories.