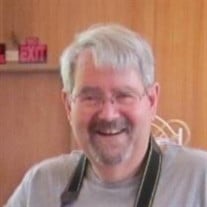 Curtis Lindol Miner, age 75, Cumberland, RI passed away in the early hours of Wednesday February 2, 2022, just one day before his 76th birthday. The son of George Lindol Miner and Jane Osborne Miner, he is survived by his wife Diane Miner; their children Melinda McCann and Russell Miner; and his grandchildren Aaron, Nicholas, April and Elizabeth. Curtis was raised in Potowomut, RI, growing up in a house on Narragansett Bay where he developed a love for the sea, which he held his whole life. He cherished his experiences of swimming and sailing as a youth and shared that love of the sea and its experiences with his family. A graduate of Franklin Institute in Boston, and later studying at Roger Williams University, Curtis earned an associates degree in engineering and learned many of the trade skills which he applied in his long career at the Warwick Sewer Authority, where he retired as Chief Inspector. While studying in Boston he met his future wife Diane. The two of them moved to Warwick, RI in 1970 where they settled down, raised a family, and shared a loving marriage for over 50 years. Curtis enjoyed photography, and he could usually be found taking photos of the family he loved, as he shared life’s experiences alongside them. When not taking photos, he preferred to use his extensive trade skills to work on projects around the house and yard. Whether it was working on his Scout, building a sailboat, adding an addition to the house, or tending to a garden, his hands were always busy. A Member of the Warwick Central Baptist Church, and later, the Oaklawn Community Baptist Church, Curtis grew many warm and lasting friendships and enjoyed singing in the choir. It is at the Oaklawn Community Baptist Church, 229 Wilbur Avenue, Cranston on Saturday, February 12, at 2:00 p.m. where a memorial service will be held in his honor. In lieu of flowers, the family asks that you consider a donation to the Oaklawn Community Baptist Church in his memory

Curtis Lindol Miner, age 75, Cumberland, RI passed away in the early hours of Wednesday February 2, 2022, just one day before his 76th birthday. The son of George Lindol Miner and Jane Osborne Miner, he is survived by his wife Diane Miner;... View Obituary & Service Information

The family of Curtis L. Miner created this Life Tributes page to make it easy to share your memories.

Curtis Lindol Miner, age 75, Cumberland, RI passed away in the...