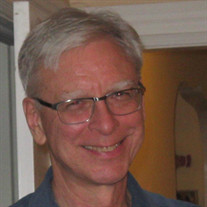 Conrad Dale Johnson, 73, died on October 9, 2021. Supported by a rich network of family and friends, he remained in the home he loved savoring life itself until succumbing to pancreatic cancer. He will be remembered for his endless compassion, terrific cooking and powerful mind. The son of Howard and Charlotte Johnson, two theologians, Conrad earned a Ph.D. in the history of human consciousness at UC Santa Cruz. He never let go of his passions for physics and philosophy even as he supported his family by working in the financial industry. His essays discussed the importance of relationships between atoms and their context as well as between people and theirs. Samples of his work can be found at academia.com. He was also the unsung webmaster and support staff for the Youth Restoration Project, a Rhode Island non-profit. Conrad was a devoted family man, reading aloud to his three boys almost nightly through their early teenage years. He supported them and his wife Julia through their many, and sometimes nutty projects. Together he and Julia nurtured their 1904 house and abundant perennial garden for 36 years. He was the farmer of the garden plots whose produce became his sauces and greens for his much-admired feasts. Conrad is survived by his wife, Julia Steiny, their three sons Soren, Nicholas, and Felix, daughters-in-law Emily and Anna, grandchildren Delia, Tessa, and Anden, and his brother Dana and his family. A funeral Mass of the Resurrection will be held at St. Stephen's Church, 114 George St, Providence, RI 02906, on Saturday, October 23rd, at 10:00 am. In lieu of flowers, the family requests donations to Farm Fresh RI, 10 Sims Avenue Unit 103, Providence, RI 02909 or farmfreshri.org

Conrad Dale Johnson, 73, died on October 9, 2021. Supported by a rich network of family and friends, he remained in the home he loved savoring life itself until succumbing to pancreatic cancer. He will be remembered for his endless compassion,... View Obituary & Service Information

The family of Conrad Dale Johnson created this Life Tributes page to make it easy to share your memories.