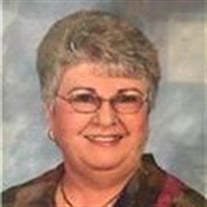 Barbara B. Hamm, 81, went home to be with the Lord on October 25, 2019 after a long illness. Barbara was born September 12, 1938 in Westerly, RI, to the late Minnie Nardone Burdick and Raymond William Burdick of Pawcatuck. She was raised in Pawcatuck and graduated from Stonington High School in 1956. Barbara met her future husband, Merle D. Hamm, who was in the Navy and stationed in Groton, in May 1955. Merle was from North Dakota. They were married December 1, 1956 and lived in the Clarks Falls section of North Stonington for 36 years. In the 1960's Barbara worked for Thorpe and Trainer Insurance, Frank Adamari Insurance and Morris & Turano, Builders. Barbara was very active at the Second Baptist Church of North Stonington, singing in the choir and heading many committees. She was affectionately known as "the General" for her take charge manner! After Merle retired from Electric Boat in 1995, they moved to Yuma, AZ, where they lived until Merle passed away in 2003. Barbara moved back to Westerly and lived at Merchants Village. In 2016, after many health issues, she became a resident at the Westerly Health Center. She was very active in all their activities, especially bingo, cards and their many musical programs. Barbara was well known for her love or purple which she wore most of the time! Barbara is survived by her sister, Carole B. Kerr, husband Hank, of Niantic; her niece, Lisa Ginther Boardman, husband, Sean, children Emily and Zachary, of Westbrook; her nephew's wife, Tiffany W. Ginther, children Carter and Oliver of East Lyme; and several brothers-in-law and wives, nieces and nephews, on the Hamm side. She is also survived by her uncle, Henry J. Nardone, and aunt, Anne Nardone, and many cousins. In addition to her parents, she was predeceased by her beloved husband, Merle, and her nephew, Gregory Ginther. A memorial service will be held at 11:00 a.m., Saturday, November 2nd, at the Second Baptist Church of North Stonington, 146 Pendleton Hill Rd, North Stonington, with a reception to follow.

Barbara B. Hamm, 81, went home to be with the Lord on October 25, 2019 after a long illness. Barbara was born September 12, 1938 in Westerly, RI, to the late Minnie Nardone Burdick and Raymond William Burdick of Pawcatuck. She was raised in... View Obituary & Service Information

The family of Barbara B. Hamm created this Life Tributes page to make it easy to share your memories.