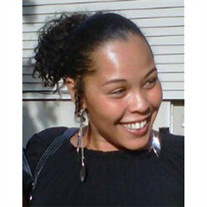 Arien Desiree Daly, 32, of Providence, the only child of Jacqueline Daly and McKinley R. Odom Jr., died during a tragic act of violence on August 22, 2015. She was a student at Bay View Academy, St. Pius V, the Community Preparatory School of Providence, and a graduate of Classical High. More recently she attended Rhode Island College where she was studying Political Science. During her time at RIC she was a founding member of Alpha Sigma Tau Sorority and was very proud to have gotten her ˜Greek". Arien was a beautiful person on both the inside and out, she auditioned to be on America's Top Model, had been a hair/lip model and loved beautiful clothes. Earlier this year she had 'finally' gotten her driver's license so she could be more independent. Always thinking of others she was excited of to be listed as an organ donor, a wish that sadly couldn't be fulfilled due to the nature of her death. Arien grew up with animals and had a deep love of nature. She enjoyed being outdoors whether it was a local park, the sea shore or a path through the woods. She photographed everything from architecture to zebras and shared it with whoever wanted to look. When her apartment didn't allow a dog or cat she had fish and gave them all names. Arien cared about people; she not only tried but really made a difference in the world. Surprisingly modest she often did volunteer work, regularly donated blood and even saved the life of a woman who went into diabetic shock just a week before. Arien worked for many years at Aids Care Ocean State (ACOS) and was featured on NPR for her work in HIV/AIDS prevention. More recently she had taken a job at the Seven Stars Bakery because of her passion for baking. She loved to cook, often making the most amazing meals, cakes and pastries for her friends and family.Arien is survived by her mother, father, significant other Osvaldo Lugo, maternal Aunt Cheryl & Uncle Ray of MA. , three half brothers: Gregory, McKinley III and Marcel Odom. Her only living Grandmother Delores Odom of Waterbury Ct. Her paternal Aunt Marcie and her Aunt Rachel who sadly passed before her. Of all her cousins she spoke most often to and about Ernest and Marquis. She also leaves many, many friends and acquaintances throughout Rhode Island, Connecticut, Massachusetts and beyond. The one thing that almost every person who met Arien remembers about her was a smile that could light up a dark night and bring joy to anyone who saw her. In lieu of flowers her mother asks that people follow in her daughters footsteps and consider becoming an organ donor, blood donor or support HIV/AIDS prevention. Should you choose to send flowers anyway please consider donating a tree(s) through The Trees Remember (http://thetreesremember.com/memorial-trees/) or a potted plant which would a living tribute.

Arien Desiree Daly, 32, of Providence, the only child of Jacqueline Daly and McKinley R. Odom Jr., died during a tragic act of violence on August 22, 2015. She was a student at Bay View Academy, St. Pius V, the Community Preparatory School... View Obituary & Service Information

The family of Arien Desiree Daly created this Life Tributes page to make it easy to share your memories.

Arien Desiree Daly, 32, of Providence, the only child of Jacqueline...