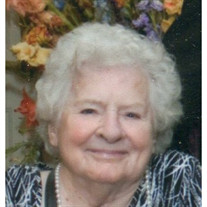 Alice (Gavin) Cassidy, our beloved mom and grandma, passed away peacefully on Tuesday, February 02, 2016 at the Orchard View Nursing Home in East Providence. She was 99. She was the beloved wife of the late John A. Cassidy Jr. and mother of Mary Babineau, Joyce Reilly, John A Cassidy III and Joan Romano. She was the cherished mother-in-law of Clay, Peter, Gloria and Robert, the grandmother of 13 grandchildren and 37 great-grandchildren. There are few other things you should know, a few suggestions you might take in the pursuit of a life as well lived as Alice Cassidy’s was. Among them: Laugh long and hard till it hurts. Alice Cassidy’s laugh had a range. It started small, with a giggle, grew to a chortle and, if you were lucky, became so huge that her whole body would quake. She laughed till it pained her, till she was breathless and flushed in the cheeks. When she put her hands to her mouth to try to contain herself, you knew she’d lost all self-control. And if you were the impetus for that full-body laugh, your day was made. Make gifts with your hands and heart. Alice could knit, sew, quilt, embroider, paint, sculpt, sing, and draw, and these talents were often brought to bear on your Christmas present on any given year. And the beauty of the gift lay not in what it was but rather what it was in you that she honored with it. She would draw your portrait and imbue it with how she saw you – a beautiful creature, perfect in every way. Yes, sometimes your sweater’s fit was a little off and there were those knitted slippers that just hurt too much wear. But even the imperfections were wonderful, because they made for the best memories. Hold babies as often as possible. Every baby was perfect to Alice. And she approached each with awe, expressing her wonder at the pink perfection of their fingernails, pressing her cheeks to their downy heads, staring and marveling at their beautiful eyes. To see her hold a baby was to witness a person in a moment of pure bliss. Waking or sleeping, even crying – the baby’s disposition mattered not a whit. They brought her joy. Don’t let embarrassment get in the way of a good time. Alice Cassidy could laugh at herself like no one else. She enjoyed a great joke even when she had a hand in its punch line. An underwear fail as you're walking down the aisle at your granddaughter’s wedding? Laugh it off. She personified the adage, “Laugh and the world laughs with you.” And we laughed. A lot. Delight in your children and their children. No one was more beautiful, talented, witty, charming or funny than Alice’s children and grandchildren. She delighted at every school performance, skating competition, straight-A report card, art project, song played, joke told, cake baked, home run hit and cartwheel executed. Everything her children and grandchildren did was remarkable to her. And there was no vying for her attention. Somehow she managed to make all of us feel special. Have sweets. And wine. After all, she lived to the age of 99. Enough said. Have faith and act on it. Alice lived her beliefs. They informed everything she did. As a spouse, as a parent, as grand- and great-grandmother, Alice sought to emulate the actions of Jesus Christ (and the Virgin Mary. She loved the Virgin Mary.) As such, every action was a prayer. She embraced, wholeheartedly, her role as wife and mother. Though she would shy away from the idea that her life was a meditation on love and her actions the manifestation of that love, nonetheless it was and they were. Ask anyone. Know the value of wallpaper paste to inspire off-the-charts happiness. Because Alice knew there was no quicker way to a child’s heart than a handmade papier-mâché piñata and no greater excitement than to be given a blindfold and bat and told to have at it. Be inventive, especially when cooking. Recipe for Alice Cassidy’s Irish Spaghetti · One block of American cheese (any size) · One can of Campbell’s Tomato Soup Directions: Melt the cheese in the soup. Low heat or high heat. Whatever you have time for. Pour it over spaghetti. Have fork and knife ready. Alice Cassidy, thank you from all of us. Heaven got a grand one today! A Mass Christian burial will be Monday February 8th at 10AM at St. Mary’s Church, 1525 Cranston St., Cranston. Burial will follow to RI Veteran’s Cemetery, Exeter. Calling hours for family are Friday

Alice (Gavin) Cassidy, our beloved mom and grandma, passed away peacefully on Tuesday, February 02, 2016 at the Orchard View Nursing Home in East Providence. She was 99. She was the beloved wife of the late John A. Cassidy Jr. and mother of... View Obituary & Service Information

The family of Alice Cassidy created this Life Tributes page to make it easy to share your memories.

Alice (Gavin) Cassidy, our beloved mom and grandma, passed away...