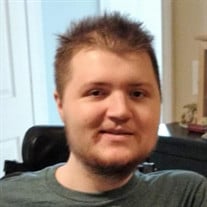 Alexander Douglas Byrnes, beloved son and brother, died on February 21, 2022 at the age of 30 in North Kingstown. He passed peacefully in his home surrounded by close family, and his expansive collection of Star Wars Legos. Survived by his mother, Deborah Byrnes, his sisters: Abigale Byrnes and Amanda Beck, his brother-in-law Chris Beck, and his niece and nephew: Olivia and Jackson Beck. Alex is predeceased by his father, Paul Byrnes. Facing a lifetime battle with Duchenne's muscular dystrophy, Alex eventually passed due to complications. Despite his diagnosis, he lived a happy life filled with laughter, video games, and many furry friends. He grew up with treasured friend, Quinn Earley, along with his many cousins, aunts and uncles. Alex will be greatly missed. He was continually kind, thoughtful, and generous. He will always be remembered for bringing humor to the lives of the people around him. With a passion for movies, storytelling and a fierce determination, he achieved a Bachelor's Degree in Game Design with an emphasis on 3D modeling from the New England Institute of Technology. Earning the Best in Tech Scholar Award in the process. In the later stages of his life his passion for storytelling evolved into writing and creating science fiction and fantasy stories. It is our hope that these stories will one day be published and find their way to the big screen. One of Alex's greatest wishes was to go to space. As he was unable to accomplish this in life, his ashes will be added to a Celestis Memorial Spaceflight where they will rocket to the edge of space. In lieu of flowers, the family are asking for donations to cover Alex's flight and final life expenses. A celebration of his life and a viewing of the rocket launch will be announced at a later date. “May his soul roam where it must, and his body return to stardust.”

Alexander Douglas Byrnes, beloved son and brother, died on February 21, 2022 at the age of 30 in North Kingstown. He passed peacefully in his home surrounded by close family, and his expansive collection of Star Wars Legos. Survived by his... View Obituary & Service Information

The family of Alexander Douglas Byrnes created this Life Tributes page to make it easy to share your memories.